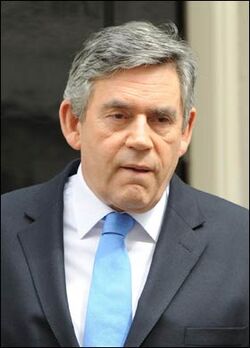 LONDON, United Kingdom -- At last, after nearly three years (blimey) of generally being unpopular British Prime Minister Gordon Brown has announced he is stepping down as leader of the Labour Party in the wake of the British electorate putting a cross next to the "Nobody please" box in the British General Election of 2010.

Standing on the steps of Ten Downing Street, dressed in his ceremonial kilt and Tam O'Shanter, the "New William Wallace" (as he has never been called until this article) said his farewells in style.

"I feel it would be best, for both myself and the country, if I stepped-down from my position as Labour leader." said Broon Brown. Following a spectacular and energetic "Farewell Dance" which involved leaping around beside a haggis, he then munched noisily on a deep-fried Mars bar in the traditional manner of a Scotsman whilst taking questions from reporters. He was unable to answer them, sadly, as he had his mouth full and instead just gave them that semi-smile accompanied by a lot of chocolate and greasy batter.

The Prime Minister has had an eventful period in office: seeing-off the worldwide slump caused by bankers being greedy cunts; messing-up shaking that policeman's hand when Obama came to Downing Street; defeating the menace of the Skrull invasion alongside longtime friend Captain Britain[1] and calling an old woman a "bigot".

Responses to Brown's resignation were mixed. "Thank goodness, this country is now free from the domination of the Jock Communist" wrote angry blogger Terrance P Twatface who blogs under the nom-de-plume "Fucking Idiot on the Internet". "Thanks to his Marxist control-freakery, Britain is crammed with CCTV so that the State can watch me, specifically, as I go to the shops and buy my copy of the Daily Telegraph, presumably so they can plan to have me sent to Guantanamo Bay for being "politically incorrect". For too long he conspired with the International Scientist Conspiracy to invent so-called "global warming" in order to tax me, specifically, for enjoying the freedom to own a hideous 4x4". Some, however, were sad to see Brown go. "I will miss him" said former Prime Minister Margaret Thatcher. "Without him, my government could never have crushed the menace of Kaiser Napoleon Bonaparte.".

The decision by Mister Brown to step-down took the focus of the British media away from the possibility of the exciting new comedy double act "Cameron & Clegg" who we all expect to be amusing us with their brand new series "The Next Government" in the coming weeks. "Some people say there's too much comedy made by toffs who went to public school" says Yorkshire baldy William Hague "but I've seen a sneak preview of their material and it's hilarious".

But whether Brown will be tuning in to watch the antics "the posh one" and "the not-so-posh one" we can't say. Asked about it when he'd finished his fried chocolate the outgoing Labour leader gave us a "cheeky wink" and said. "Well, boys, you know me. I'll be off back to my highland castle to hunt the wild haggis and drink whisky, all the while waiting for the return of the King Across The Water. And I'd just like to say one last thing: I'm sick of these dreadful stereotypical Scottish things I'm described as doing, the person writing this is Scottish for goodness sakes. He should know better. Shame on you! You know who you are!"