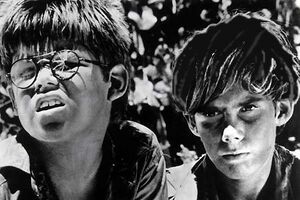 4-year-old school pals Yeh Chien-Anda-Lou (right) and Pih-Gee (left) have settled in to their new island home, the result of lottery luck.

TAIPEI, Taiwan -- Four-year-old Taiwanese boy Yeh Chien-Anda-Lou scooped an amazing prize in a lottery aimed at raising public spending during these difficult economic times this week when he won exclusive rights to a tropical island in the Taiwan Straits, allowing him full dominion over the island until September. The tiny, previously uninhabited island boasts golden sandy beaches, lush rainforest and a number of crystal-clear streams along with beautiful waterfalls and is home to an impressive selection of flora and fauna including fruit, parrots, fish and wild pigs.

The lottery draw took place this week, and UnNews reporters obtained the boy's family's telephone number shortly afterwards at 8.30 Taiwanese time; but we were unable to speak to Yeh because, as his mum told us, "He's fast asleep, tucked up in bed - he has a spelling test at school tomorrow, so he needs a good night's rest," preventing us from bringing you the story as it happened.

However, we were able to contact the boy yesterday, who has now settled in at a specially-constructed hut on the island, having taken a number of friends with him for company. "It's been so much fun," he said, "My best friend Pih-Gee and I found a pretty shell which we can use like a trumpet. It's very handy because with it we can call back my other friends from the forest when they've gone to pick fruit. We had a bit of an argument on the first afternoon, because my other friend - Yah Khmer-Idu - was getting a bit bossy because he's older than me, but we had a vote and everyone decided I should be the chief."

It has not been all plain-sailing for the boys though - some of them have been suffering from acute diarrhoea, possibly as a result of the vast amounts of fruit they have been consuming. Some of the younger boys have also been experiencing nightmares due to their childish belief that the island is inhabited by some sort of monster, a belief that was quickly dispelled when Yah Khmer-Idu and a few of the other older boys proved that what the younger lads had actually seen was one of the wild pigs.

"The island is absolutely safe," claimed a Taiwanese naturalist and government minister. "We've sent some of our people out there a few times in the past and they've all come back talking about the place like it's some sort of tropical Eden. None of them saw any poisonous snakes and the pigs seem docile. In fact, the only dark patch in the island's recent history was one soldier who parachuted in a few years back and was never heard from again - we believe he probably landed badly and was killed."

Yeh adds, "Yah Khmer-Idu and some of the bigger boys have formed a hunting party to try to catch one of the pigs, because we need to eat meat as well as fruit, or we'll keep on being ill. He says it'll be fun." The young lads will doubtless be further comforted once a pig is killed, displaying to them that it is merely a normal animal and not a monster.