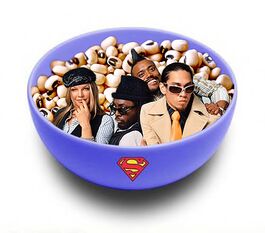 ARLINGTON, Texas -- Super Bowl XLV won't be the only big sell-out this Sunday. While ardent football fans will be enjoying the clash between the Green Bay Packers and the Pittsburgh Steelers in a Winter Wonderland of 80 degrees below zero, the popular hip-pop-electro-unce-unce-whatever band the Black Eyed Peas will warm up the night via heavy song sampling, lyrical repetition, repetition, repetition, repetition, dropping the beats "Ba Bump Ba Bump" and bringing the phunk during the halftime show.

♪ I Gotta Feelin' ♪ ...that we're going to hear much more of this kind of crap on the radio soon.

Performing before more than 100 million viewers worldwide, the Black Eyed Peas will not accept a single dime for the show. While most musicians voluntarily host the Super Bowl halftime show for free in expectation of greater publicity and increased album sells, it will be even less of a loss for the Peas to forego pay, as a typical BEP music video alone makes more advertising money through product placement than the big game itself. In fact, one shouldn't be surprised if the Black Eyed Peas' performance features a Budweiser clydesdale or a special shout-out to Doritos spicy jalapeño tortilla chips.

Band leader will.i.am, who re-adopted his original '90s rap name Will 1X to sound "more Super-Bowl-y" [sic], told MTV, "This is like such a big break man 'cause we never thought in our wildest dreams we'd make it this far. You know, uh, doing the halftime will help spread our music to a wider audience than it has right now. BEP has always been about one thing and one thing only, and that's makin' loads a' money, I mean, music with soul."

This will be the first Super Bowl halftime show to feature a female since 2004 when Janet Jackson bared her lovely lady lump. (Check it out!) Due to the circumstances, Will 1X has promised both FOX and the NFL that there will be extra-thick adult diapers in case of an unwanted "