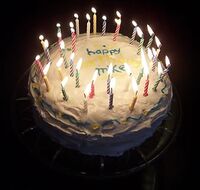 A duplicate of the historic birthday cake. The remaining slices of the original have been placed in an airtight vault below the Smithsonian.

Worldwide- In a startling turn of events last morning at 8:15 A.M., world peace was achieved at last, due to the noble efforts of Mikey Briar, 7, of Fairfax, VA. The previous day, Briar had celebrated his birthday with a traditional "birthday cake," and, as part of the tradition, had made a wish while blowing out a number of candles placed on top. "We were just so proud of our little Mikey," commented his mother, Melissa Briar, to the Associated Press this morning. "He wished for world peace! Now isn't that the sweetest thing you've ever heard?" However, little did she suspect the incredible repercussions of her son’s simple wish. Within 24 hours, an inexplicable feeling of contentment and love for mankind had settled upon the world's populace.

As events unfolded, it rapidly became clear that Briar's simple wish had, in fact, brought about the long sought-for goal of world peace. Conflict all over the globe was brought to a near immediate cease. Last night, Kim Jong Il, controversial president of North Korea, announced that he was unilaterally dismantling his nation's nuclear weapons program, and called on all countries worldwide to join him. The United States rapidly announced their support for Kim Jong Il's plan, and many other nuclear powers have joined this disarming race. Nuclear weapons are tipped to be a thing of the past by next week. 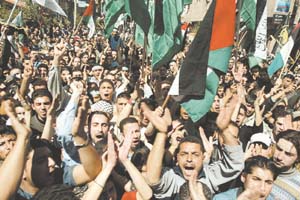 The Iraqi Insurgency Men's Chorus practices "You Are My Sunshine" to bid American forces farewell.

The White House has announced plans for an immediate withdrawal from Iraq, but insurgency leaders have released a video on Al-Jazeera pleading for "the Americans to stay at least a week more" in order to "organize a good-bye party." There have been an estimated 20 soldiers injured as they joined the citizens of Baghdad in linking arms, singing, and dancing, with multiple casualties of inadvertent trampling.

This sudden loss of conflict world-wide is expected to hit the global economy hard. Private detective agencies are already recording losses as Crime rates plummeted overnight to record lows. The arms and medical industries are also expected to suffer severely. Sales of video games containing violence and death, including Halo, Grand Theft Auto, and Pac-Man have all but ceased, but there is hope for the gaming industry as sales of Tetris have soared. In the new spirit of peace and happiness, the makers of Tetris are designing a version that is impossible to lose. Time Magazine announced that it is ending its prestigious annual "Person of the Year" awards, to be replaced by an annual "Everyone's Great" feature, a move given precedent by their declaration of 2006's Person of the Year to be You.