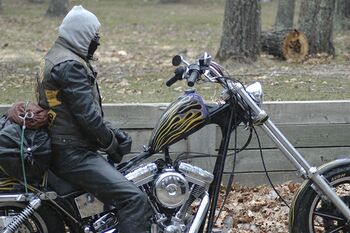 MAINE, USA - Helicopter Ambulance services were called to the scene of an apparent 'accident' on Sunday after Harley-Davidson owner Al Ectraglide, a member of the Bandidos MC motorcycle club, was riding his bike at "around 45mph" (biker-speak for 110mph) with a friend when a wild turkey flew straight into his chest, knocking him from the bike.

Mr. Ectraglide was struck unconscious during the incident on Route 117 but was saved by his friend who used his cellphone to call 911, the well-known British all-boy pop group, who advised him to contact emergency services and arrange for an ambulance to attend the scene. The helicopter was on the scene within minutes where medics resuscitated the man after checking neither his spine nor skull were damaged. He was then airlifted to hospital where UnNews interviewed him last night. "If you can imagine what it'd feel like to get hit by bowling ball fired from a steam catapult," he told us, "well, that's kinda what it felt like. It sure knocked the wind right outta me, and the next thing I know is I'm in a helicopter with the doc trying to bring me round."

The story would have ended right there and made it no further than page 17 of the local newspaper, were it not for the fact that a rumour has arisen which claims that Mr. Ectraglide has been heard speaking to other members of his motorcycle club by telephone from his hospital bed, conversations in which he stated that just prior to impact he noticed that the turkey appeared to be wearing a leather jacket adorned with the instantly-recognisable Hells Angels MC colours. Ectraglide refuses to either confirm or deny this claim to reporters while Angels spokesman Ed Kase has gone on record to state that his club do not accept membership applications from turkeys. However, police have interviewed a number of hospital employees who say that they heard Ectraglide's conversation and have been observed to have stepped up patrols in areas known to house Bandidos and Angels clubhouses in order to prevent gang warfare from breaking out.

Mr. Ectraglide's motorcycle was not injured during the incident, but became highly agitated and fled into woodland where it is now believed to be living wild.