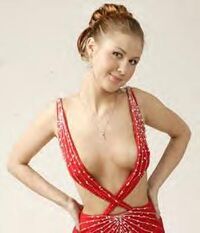 
LA MESA, CA - Barely There Prom Dresses, makers of skimpy formal gowns and dresses that “reveal rather than conceal” high school juniors’ and seniors’ charms, have become a popular new trend among girls ages 16 to 18 while raising the ire of parents and school authorities.

Some schools have banned the brand of skimpy prom dresses, citing rules against baring too much of the student body.

“It’s okay to be a girl and to have breasts and buttocks, just not at my school,” Mary Jane High School principal Barbara Peters told Unnews' reporter, Lotta Lies. At Mary Jane, dresses have to cover both breasts, not just one or the other, including the nipples, and must extend to the middle of the knee. No cut-outs or thigh-high slits are allowed, and girls must wear “appropriate foundation garments”, even if they elect to wear a strapless dress. For girls, athletic supporters are “recommended, but optional,” Peters said. However, “see-through apparel of any kind is also prohibited,” she declared.

“Damn!” Mark Lewis, a senior at the high school complained. “What’s left? Elbows and kneecaps? I want my date to look hot. If I wanted to take a mummy to the prom, I’d live in Egypt.”

Maria Verde was also upset at the school’s policy. “I just paid $300 for a Barely There Prom Dress that exposes my midriff, and now the bastards are saying I can’t wear the damned thing because there’s something wrong with showing my belly? I ought to just drop out of school!”

Parents back the principal’s decision, saying they are sending their daughters to school to become valedictorians, not exhibitionists, and they’re not interested in having them display themselves for the thrill of “voyeuristic boys.”

“They’re there, supposedly, to get an education,” Samantha Barton, a local mother and head of the PTA said.

Abigail Hagg, a senior at Mary Jane, disagreed. “I have buck teeth, crossed eyes, and freckles,” she pointed out, “but I have a killer body. The purpose of the prom, for girls like me, is to snare some hapless boy as my future husband. I bought a Barely There because I need all the help I can get. With a paper bag for a mask, I might actually find a boy who’s willing to slip into something a little more comfortable, like me. Unless I'm allowed to wear my low-cut, low-back, strapless mini, I can’t dress to impress.”

Another example of what not to wear, Principal Peters said, is this Barely There dress

Peters is unmoved by student protests, insisting that any girl, Abigail included, who wears a Barely There Prom Dress or any other “inappropriate” garment to the prom will be denied entrance or sent home. “We may not even give them a blank, rolled-up sheet of paper with a ribbon on it for their graduation,” she said. “The prom’s going to be held in the gymnasium, not a bordello,” she added, “and students need to dress accordingly.”

Verde pointed out that the word “gymnasium” derives from an ancient Greek word, “gymnazein”, meaning “to train naked,” and that the school allows girls to take nude showers together, despite the presence of lesbians among the student body, in front of adult female teachers. “It's okay to strip in front of gay girls and adult perverts,” she charged, “but I can't show a little flesh for my boyfriend? It's ridiculous!”

“The school's cheerleaders wear less than they're allowing us to wear,” Jennifer Anusson pointed out.

“Cleavage is a no-no,” Barton warned students, “and chaperones will be looking down the fronts of girls’ dresses and up their skirts to ensure that they’re wearing bras and panties. This isn‘t a pajama party or a lingerie show, and violators will be evicted.”

Beverly Johnson, a spokesperson for Barely There said, in response to the parents’ and school officials’ ban on their garments, “My, my, but don’t the claws come out after age forty!”

Note: This article is sponsored by Barely There Prom Dresses, which believes that there is "no such thing as bad publicity.”