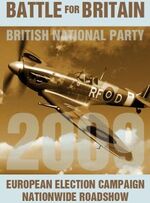 "We knew it was a Polish Spitfire," say the BNP. I bet you did, twats.

BRITAIN, United Kingdom -- The far-right white supremacist British National Party has once again embarrassed its knuckle-dragging members after the latest in a long series of blunders. Coming just a short while after the party's entire membership list was posted online, an emotive new campaign poster, intended to stir the feelings of every racist idiot to see it, depicts a Polish Spitfire fighter aircraft.

Britain has a large number of Polish economic immigrants who have entered the country in order to earn money in low-paid jobs such as hospital cleaning, street sweeping, fruit picking and other forms of essential work that nobody else wants to do. However, some British people fear that there are now too many of them in the nation, even though most of them go back home after a few months - the BNP has used this misconception to promote its own racist ideology and as such has recently enjoyed an increase in popularity, enabling them to attain as much as 25% of the vote in some areas of the country known particularly for the small-minded cretinism of their inhabitants.

However, historians have identified the plane in the iconic image - Romeo Foxtrot Delta - as one of those belonging to 303 Squadron, which was made up entirely of Polish pilots rescued from France prior to the Nazi invasion, who chose to fight alongside the British during their struggle against Fascism; and are known to have been the most highly-effective of the many Polish units in the British military during WW2, shooting down many Nazi aircraft.

The BNP claim that they were well aware of the plane's history, using their standard tactic of "pretending every cock-up was actually a deliberate act." A spokesman for the party said, "It's not like the BNP are against Polish people as a nation. We are against Polish people coming over here and undercutting British workers. I mean how would the Polish people feel if their government started letting in millions of Vietnamese and letting them work for three bowls of rice a day?" An argument that falls a little flat when it's pointed out that Polish immigrants are not allowed by the UK government to be paid ridiculously low wages, thus undercutting British workers, but in fact can expect to receive the National Minimum Wage just like everyone else.