WASHINGTON, DC – In a controversial campaign to increase the enlistments of men into its dwindling ranks, the U. S. Army has permitted female soldiers in uniform to breastfeed their children.

"Nothing catches a red-blooded, all-American man's eye like a pair of pert and pretties," Sargent Major Tim O'Neal declared. "If a man sees that the Army allows its female soldiers to whip out their tits anywhere, at any time, to feed their dependent children, he's going to think twice about foregoing the chance to serve his country."

The Army expects the enrollment of male recruits to double as a result of their recent Babes in Arms advertising campaign, which features proud, smiling female soldiers breastfeeding their babes in arms for all the world to see.

"Billboards across the fruited plain have been erected featuring nursing military moms," O'Neal said. "In addition, American civilians can expect to see female soldiers unbutton their camouflage battle dress uniforms, lift their undershirts, and expose themselves while their cherubic children suck until they're completely satisfied. Right alongside commercials for Viagra, erectile dysfunction, and Pajamagrams, teenage boys will have a chance to see what awaits them if they enlist in the Army."

General Voyeur, a spokesman for the Pentagon, said, "Male enlistment has dropped sharply since we've been sending troops back to combat for three and four consecutive tours of duty. Young men needed an incentive to join the military, and a free college education just wasn't cutting it anymore. We think the chance to see female soldiers' tits will attract recruits even more than the chance to see the world—especially when, lately, the 'world' consists mostly of Iraq and Afghanistan."

Not all military personnel are enthused about the recruitment campaign, however. Captain Liz B. Anne believes that the advertising strategy "dehumanizes female soldiers. These are fighting women, not cows," she said. "It's a sad thing when the Army brass regards a soldier's greatest assets to be her tits and ass."

Major Ima Dyke also has reservations about the campaign. "We have too many men in the Army as it is. Women need to keep their tits to themselves." 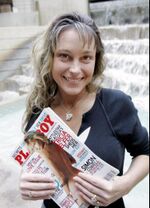 Boobage, such as Michelle Manhunt displayed while posing for Playboy, was forbidden by Air Farce faggots, but it is encouraged by macho Army brass.

"The next thing you know, female soldiers will be posing for Playboy while they're wearing their uniforms," Sgt. Beau Hanks predicted.

Told that an Air Farce staff sergeant, Michelle Manhunt, had already posed for the men's magazine while in uniform, Hanks asked, "Which issue?"

Manhunt received an honorable discharge for misconduct as a result of her appearance in the magazine's six-page spread. "She was out of uniform while in uniform," her commander, Captain Sandy Shores, explained.

"I didn't think it would be a big issue," Manhunt said during her court-martial.

However, according to Playboy publisher Hugh Hefner, "The issue was a big deal, indeed: we sold over twelve million copies."

In one of the television commercials due to air this month, Sgt. Crystal Scott, smiling into the camera, announces, "I'm an X-ray technician, and I breastfeed in uniform all the time, every chance I get." She then unbuttons her battle dress uniform shirt, lifts her undershirt, and exposes her breasts.

"Her nipples are rock hard," O'Neal promised. "She lets potential recruits take a good, long look at them, before, lifting her twin boys and cradling one in each arm, she lets them feed." Looking back at the camera, a smile of bliss on her face, she says, "Why don't you join me." Then, the announcer says, "Visit your local Army recruiter today. You'll be glad you did." Another shot of the breastfeeding sergeant appears on screen as Scott winks at the viewer.

"If that spot doesn't get a man to enlist, he's gay and we don't want him, anyway," O'Neal opined.

In another television advertisement, another female soldier, Corporal Terran McCabe announces to the camera, ""I breastfeed in our lobby, in my car, in the park, everywhere, and I use my breast pump whenever the need arises, regardless of where I am or what I'm wearing." Film footage shows her doing these activities while her male counterparts gawk at her display.

The Army has redesigned women's uniforms, adding flaps that, situated over the breasts, unsnap easily so that the flaps can be lowered quickly, allowing maximum exposure of the mammary glands in mere seconds. "We're doing all we can to encourage our soldiers to expose themselves for the good of their country," O'Neal admitted. "We know when we've got a good thing going."