UnNews:Amy Winehouse is Alive and Kicking 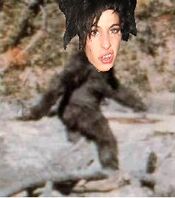 SIBERIA, Russia -- According to many eyewitnesses, the presumed dead British singer Amy Winehouse is alive. A photo was taken, proving that Amy lives in the Siberian wilderness. Also, a research took place, but nobody was able to find her.

It was a sunny day in Siberia, a fact beyond belief. Hence many inhabitants decided to soak up some sun. Actually, there were many people who had never seen a sun before. Anyway, it was about lunchtime and everyone took out their picnic baskets, ready to eat. Then, a little girl cried out: "ДДДДДД! ДMУ WIИЭHOUСЭ!!" Startled, Winehouse turned her head. At this very moment, a young man called Ivan, took her a photo, which is seen right here.

Many people ran towards her, but Amy leaped twice like a kangaroo and disappeared in the woods. Everyone was dissapointed. Someone called the police, but the paparazzis got there first. All together, aided by a couple of Orthodox priests-fans searched out for Amy. Even though they plyed all the area, no trace of the lost singer was found.

At the same time, a few journalists interviewed the locals. According to some grannies, since Winehouse died in 2011, there's a mysterious beast lurking in the forests. Some old communists claim it's the ghost of Stalin, but most people think it's Amy herself. "I'm sure it is Amy", said a deaf lady. "I can clearly hear her singing at nights". The mayor of a nearby village also expressed these rumours. "Many of the residents here believe that Amy Winehouse lives here, in Siberia. There was not a proof for that, until today".

Alive or not, there was no sign of Amy in the forest. The search continued until the sunset. When it got dark, everyone returned home and had a plate of pirozhkis.