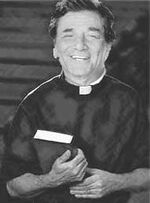 Before discovering American television mysteries, St. Columbo was a man of the cloth.

LOS ANGELES, California -- Americans have closed stores, stopped delivering mail, and sacrificed quarters for the starving children in Guatemala today in honor of the discovery of American television mysteries by Saint Lieutenant Columbo of LA in 1967. Prior to this historic day, the Lt. was a humble priest teaching heathen children to worship God and accept buggery as their Savior from normal, healthy sex. He was discovered by talent agent Lenny Briscoe, who attended a community theatre production of "Hello, Sailor!" starring the Lt. as Minnie Pearl.

Today, all television mysteries, both series and movies, are modeled after the basics of St. Columbos "Rules of Television Mysteries", first published in 1809. Although technically still alive, the Catholic Church canonized him as a saint in order to preserve their fragile truce with the Illuminati and the Freemasons.

Front doors are decorated with rumpled trench coats, cheap cigars are left burning in ashtrays, and those who can afford it are driving vintage, piece of shit Peugeots about town. Citizens take any opportunity to use the trademark phrase, "Oh, just one more question...", while pointing skyward with their right arms, and holding their heads in their left hands. 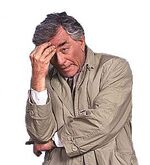 To all outward appearances, Saint Lieutenant Columbo is befuddled.

Formal services are held in churches across the States, featuring a recitation of the Sacred Columbo Plot Formula:

First, Columbo's vague comments about his wife and his past. Gathered together, perhaps these could be used to unravel the mystery of the Lieutenant himself.

Second, Columbo's "just one more thing....." questions. These were always the ones that would eventually trip the killer up. Presented as almost an afterthought by Columbo, they almost always caught their victim off guard.

And finally, and most puzzlingly, in almost every episode one piece of music appears. Some times as incidental background music, but more often than not, the Lieutenant is whistling or humming it to himself. The piece is the old children's song, "This old man came rolling home".

It is indeed a cheery holiday for Americans, and we invite our British cousins to celebrate with us by contriving plot devices for new Columbo movies.