UnNews:A&E TV takes a bite out of crime 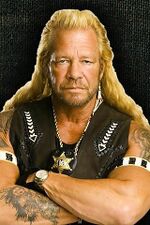 TINSEL TOWN, CA – A&E TV has canceled Dog the Bounty Hunter, saying that the stars have, at last, become “too grotesque, even for us.” Specifically, Duane (“Dog”) Chapman's “wrinkled prune face and sagging bitch tits” have “turned off” both the show's producers and its sponsors. In addition, Dog's wife, Bitch Beth has “mushroomed beyond obese” and can no longer be filmed by a single camera. “We have to place two of them, side by side, to squeeze her into a frame, and that's not only twice as expensive, but it's also twice as repulsive.” 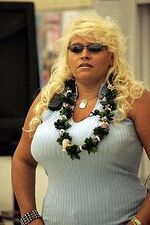 And a comfortable living it has been, too, for Dog and his litter family, for the past seven years, or “seasons,” anyway, as Dog and his kin harassed and, well, dogged men and women who skipped out on the bond that the Chapmans posted on their behalf as surety that the alleged perpetrators would appear in court for trial and sentencing. The show was filmed mostly in Hawaii, but sometimes in Colorado, Texas, and Mexico.

As a convicted murderer criminal himself, Dog served his time in Texas; the family have homes in both Hawaii and Colorado—the show has been very good to the dogged do-gooders for the past seven seasons, after all—and Dog and his sons spent time in a Mexican prison for attempting to kidnap a suspected serial rapist-killer before their Mexican attorney was able to arrange their release by paying off corrupt authorities. Their business, K-9 Bail Bonds, is located in Honolulu. 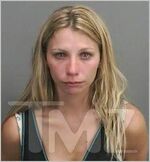 To spice up the show when its ratings began to sag, sometime during the first season, Dog's pups sons, Duane Lee and Leland, or “Fido” and “Spike,” respectively, as they are also known, pretended to have a tiff. When no one cared, Dog's sometimes somewhat good-looking daughter, 23-year-old Baby Lyssa, (a child by Dog's third wife, Lyssa Rae Brittain, not, Baby Lyssa hastened to point out, her father's current spouse, wife number five (and counting), Bitch Beth) got herself arrested by banging on doors along Queen Emma Street, damaging a window and knocking a cellular telephone out of a police officer's hand. Apparently, no one cared about her shenanigan, either, and the show's ratings continued to plummet until, this year, they reached a new low, even for reality television.

Other publicity stunts that Dog has pulled in an attempt to generate some interest in his show include incurring a number of death threats, hospitalizing his son Duane (“Fido”) Lee, acting as a human target in a Colorado shoot, failing to pay as much as $2 million to the Infernal Revenue Service (IRS), and using racial slurs to describe his daughter-in-law, none of which tactics has made any difference, as the show continues to bomb.

In addition, Bitch Beth refused to diet. “All she wanted to do was eat,” Leland, who wishes to remain anonymous, said. “She's about the size of Oahu now.”

Finally, she, Dog, and the rest of the family became “too gross” for the show's money men, and the series got the ax. Some critics say the Bounty Hunter got off easy. “They should have put him and his whole damned family back in the kennel for afflicting the airways with their redneck lifestyle,” Lyssa Rae Brittain, who wishes to remain anonymous, declared.

Reportedly, A&E TV is considering a higher-class show, the History Channel's Swamp People, as a possible replacement for the canceled series.