UnNews:75% of turkeys "addicted to cocaine" 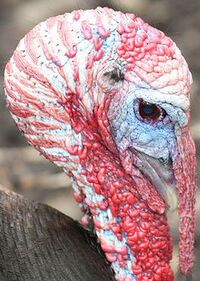 The turkey - proof that not everything in Nature is beautiful, despite what hippies might try to tell you.

However, it seems that the mystery may have been finally solved after two turkeys were arrested following a search conducted by customs and immigration officials at Lima's Jorge Chávez International Airport last week. "Our officers are trained to keep a very watchful eye on passengers boarding flights to the USA," says the airport's press officer Francisca Carreras. "Unfortunately, Jorge Chávez International Airport is commonly used by people involved in the drugs trade - importers frequently travel overland to here from Bogota in Colombia in an attempt to disguise their movements and reduce suspicion over their activities. Officers noticed a pair of turkeys acting strangely among the other passengers and called them over for questioning."

It seems that the turkeys were unable to satisfy the officers' queries, because they were then arrested and subjected to a full body cavity search. "Yeah, OK - I had to fist a turkey," says one officer who wishes to remain anonymous, "I'm not proud but sometimes a man's gotta do what a man's gotta do and it's all part of the job - and anyway, the way I look at it is it's no different to stuffing a Thanksgiving turkey. Look at it that way and just about every housewife in America's a turkey-fister."

No drugs were found, either concealed within the turkeys' luggage nor about their bodies. "It was just so obvious that these guys were into drugs though, they were really wired," the officer continues. "Neither of them could sit still, they were twitching and sweating all over the place and they had eyes like dinner plates. I've never seen anyone so obviously on drugs since Lindsay Lohan's Hollywood Film Award acceptance speech in 2006, so there was no way we were going to let them get on the plane - the more drug pushers we catch, the less likely it is that the CIA'll start interfering and those guys even give us the creeps." 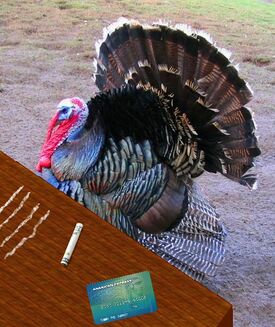 Turkey farmers have reported increased signs of cocaine use among their animals in recent years.

Blood samples were taken from the birds, who had now been transferred to a secure facility where they could be "interrogated" by Peruvian police away from prying eyes before their lawyers arrived. It is reported that - by an unlikely coincidence and in two entirely unconnected incidents - both turkeys accidentally fell head-first down some stairs onto an unattended police boot during this period, resulting in extensive facial bruising. Shortly after this time, the turkeys confessed to possession of cocaine, possession of cocaine with intent to supply, plotting to assassinate the President of Peru and a number of other unsolved crimes that Lima Police had been hoping to pin on someone or other sooner or later.

It is well-known that habitual cocaine use can cause all sorts of disfiguring effects to the human nose as experienced in 2000 by British television star Daniella Westbrook, the actress who played loud-mouthed slag Samantha Mitchell in the inexplicably popular EastEnders show, when her septum rotted away. Scientists now believe that it is this effect which gives turkeys their sickeningly revolting nasal features.

Results of the blood tests revealed that one turkey had an incredible 6.4lb (2.9kg) of cocaine in its bloodstream, which is about enough to power a Saturn 5 rocket all the way from here to Betelgeuse. The other had taken 4.2lb (1.9kg) which he explained was because he was trying to keep his "head together ready for the flight, man." According to police, this amount of cocaine has a street value in the USA of around $110,000 - UnNews would like to inform them that they are getting well and truly ripped off and, if they're interested, would be able to help them get hold of the same amount for about $90,000.

Back to Francisca Carreras: "I can confirm that we successfully detected and apprehended two turkeys, later proved to have been using large amounts of the drug cocaine which they admitted while in police custody. The Government of the USA can rest assured that we are taking an active role in preventing drugs reaching their nation, and there's absolutely no need for them to send any CIA or DEA officers down here, thank you very much."

Meanwhile, Kenny Harris - manager of The Pines Nursing Home, Houston, Texas - isn't so pleased. "Goddamn customs! In a recession, nursing homes like ours soon feel the financial pinch and we have to operate on a tight budget so we import a lot of cheap food from places like Peru. We got a frozen Peruvian turkey with just 2lb of cocaine in it last Thanksgiving and our residents reckoned it was the best Thanksgiving they've ever had - you should have seen them partying afterwards. Imagine how happy they'd have been if one of the turkeys in this story had ended up on the Thanksgiving table."