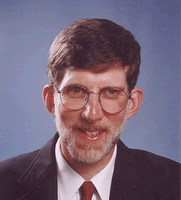 Robert "Bob" Paulson, smiling, after asking himself what Jesus would do when getting His picture taken.

WALTERBORO, South Carolina -- Robert Paulson, unlicensed electrician, amateur philatelist and canner of preserves, was paid an unexpected visit by a member of a local church last weekend. During the unrequested and informal meeting the unnamed visitor discussed with Robert such subjects as the weather, sports, politics and the future status of Robert's immortal soul. Mr. Paulson was aghast to learn that he was destined to be a permanent resident of a thoroughly unpleasant place called Hell because he, a devout agnostic, failed to believe in the divinity of one Jesus H. Christ.

A surprisingly pale person from the Middle East, Mr. Christ functioned as both Lord and Savior during His travels around that area, from approximately 0 - 30AD. Some people believe that He continues to fill those roles even today, despite the fact that the mandatory retirement age is sixty-five.

"Oh jeez, yah. I was shocked when I found out that Bob wasn't just going to be dead after he dies." said his widow, Myrna. "It's a good thing that that guy from the church woke us up at the crack of dawn on a Sunday morning to tell us all about it."

Reports are sketchy, but it appears that the visitor asked Mr. Paulson to straighten out his life while he still had the chance, by praying regularly, visiting the church regularly, and giving money to the church, also regularly.

"Bob asked him 'But how can I, a simple man with one leg longer than the other, double-jointed thumbs, and one testicle, most easily achieve such a marvelous and entirely unimaginary future?'," continued Myrna. "...to which the church-guy replied 'Just ask yourself, WWJD?'."

The Paulsons' home, doing what it thinks Jesus would do if He was a house.

WWJD? is an acronym that stands for What Would Jesus Do?. It is a popular mental exercise that a segment of the population, known as "Christians", use to avoid wading through the many wordy, conflicting and confusingly phrased passages of the New Testament to find out what Mr. Christ actually did in a given situation. Many people have been injured, killed, or arrested after asking WWJD?, a question that invariably leads them to try to cure leprosy through touch, walk on water, or raise the dead.

Agnostic houses of worship, like the one that Mr. Paulson attends, His Lady of the Possibly Divine Fun-O-Rama Go-Karts & Mini-Golf, don't use the Bible as a guide and source of knowledge for such diverse subjects as morality, quasi-history, obsolete theories of abiogenesis, and things you shouldn't do with your crotch. Instead, parishioners of his particular agnostic denomination simply stand with their arms at their sides with both shoulders and eyebrows raised, in what's called the Omah-god Ida No meditative position. These rituals vary widely between agnostic groups. For example, some substitute that position with looking up and scratching their chins, while others look down and scratch the top of their heads.

Faced with this lack of trying to avoid reading the Bible, agnostics don't feel the need to ponder just what, in fact, Jesus would do. They don't wonder what Jesus would do in a wide array of everyday situations, like giving the dog a bath, making the clock on the VCR show a time other than twelve o'clock, writing Star Trek fan fiction, or falling down stairs; all tasks that Christians find greatly simplified when they stop first to think about what Jesus would have done in the same situation.

The neighbor, name unknown, could not be reached for comment on what Jesus would do when asked for a comment.

"Before the guy left, he gave us some pamphlets and stuff." said Myrna. "Well let me tell you, Bob sure as heck did read up a storm that night. We learned a bunch of really important stuff. For example, this Jesus fellah is coming back in our lifetime. My neighbor says that people have been saying that for almost two thousand years, but she's from Oregon...I stopped listening to her after she told me that granola would keep me regular. All it did was make me, um, number two a couple times a day. I think she's on the drugs."

One of the pamphlets contained, in simple point form with colorful illustrations, information about how someone named God impregnated a virgin with His Holy Spirit, Himself, creating His child, Jesus, who was also Him. After she gave birth to Him, He wandered around telling people about how His father, who was also Him, sent Himself to Earth to show the people thereon that He was the one and only path to Himself. This ensured that He would be martyred, which was just what He in Heaven had planned to happen to His son, who was also Him, on Earth. After resting for the better part of a weekend He resurrected Himself and returned home to sit beside Himself at His own right hand. This sacrifice was necessary because, in an earlier episode, He made a flora-centric rule that Adam broke after his sister and identical twin, Eve, told him that a talking snake said that the voice in Adam's head, played by God, was lying about the consequences of disobeying this rule. Later in the story, Adam married his sister and together they settled down to raise a family. The story fails to give details on just how good their children were at playing the banjo.

Jesus also reportedly died for your sins before you even did them, you totally depraved pervert.

The Wal-Mart parking lot where Robert's life came to an end, appearing to be not worried at all that it is unable to ask itself what Jesus would do if He was a parking lot.

"So Bob was all broken up that this Jesus guy died because a couple of characters in a story that He wrote before He was Jesus didn't obey an order that was based on a threat that they could not have possibly understood, and also because Bob once accidentally coveted his neighbor's neighbor's wife; me." said Myrna between tears. "Then, this morning, he was driving around in front of the Wal-Mart, trying to find a space. So he asked himself 'WWJD?'. The next thing I know, he's gone and nailed himself to a cross in the parking lot."

Mute bystanders stood by mutely and watched this grisly event, as Robert, dressed only in tighty-whitie briefs and firmly attached to the cross, entreated them to find a Roman to poke him with a sharp, spear-like instrument of some kind. Mr. Paulson purchased the components for the cross from the Hardware, Lumber, and Home-Renovation aisles of the popular big box store. The underwear was found in the Men's Undergarment, or "gonch", section of the Wal-Mart across the street from that Wal-Mart, during a pre-WWJD shopping trip.

"I felt kind of bad for the guy when we couldn't find a country called Rome on a map." laments the assistant manager of the Wal-Mart, Steven Papadopoulos. "Eventually I got Sergei the stockboy, who is from Romania, I think, to beat him to death with a two by four, available in eight foot lengths from Wal-Mart at the 'Rollback' price of thirty cents a foot."

Sergei is currently in police custody and could not be reached for comment, although he is rumored to be asking himself what Jesus would do in his situation.