“How are we supposed to find out what the consequences are if we don't try it?”

~ A scientist on Teleportation

A means of going instantly from one place to another without having to appear in the space between. Also known as "plot device." There are two main kinds, both of which were invented in 1866 by famous American inventor Thomas Edison.

Most evident with Vikings,cats, gossip, kitsune and the money in your bank account. This is the most common type, but scientific research has yet to prove it (with the exception of money, which has been caught on film sneaking out of the bank). 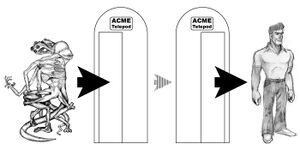 Teleportation was first hypothesized by Ultra Jesus during the War of 1812. He wished there existed a way for his penguin allies to more easily move to and from Mars, rather than transport the entire landmass of Antarctica. His dreams of military applications of teleportation were not to be realized until, in 1866, famous American inventor Thomas Edison invented the worlds first, biggest and best teleporter. Rumours persist that during World War 3D, the Russians secretly had the technology to teleport homoerotic pornography into soldiers' bunkers. This is disputed.

Pornography, however, did become the first thing ever teleported in the lab (This is of course similar to the way pornography drove the creative advancements of photography, computers, twinkies, television, vibrating mobile phones, soap, fluorescent lighting, the wheel, and Oscar Wilde) when an issue of "Page 3: The Girls of K-Mart" was dematerialized and rematerialized 7 meters away.

Modern research into teleportation has split to three paths:

Beaming, or matter transmission. The object to be teleported is recorded on a quantum level (and subsequently destroyed, as you cannot observe something without changing it (sort of like a n00b on Undictionary)), the data then transmitted to another site where it is mistaken for the source code for DeCSS, and deleted.

This method has not seen much in the area of actual advancement, mostly because the scientists use it to steal pornography and ice cream.

A variation in which the object to be teleported is recorded without any regard for the consequences of observing it, and the electronic data is then posted on the Internet and downloaded by anyone who wants to receive the teleported object and has a compatible materialiser. The original object is then destroyed, because it's fun to smash stuff. The differences from beaming are:

Physical object transportation, similar to wormhole theory, is where an object either a) travels from point A to point B through a rip or along a fold in space, b) accelerates to lightspeed by changing to a particle/wave or massive hyperneutrino, or c) attaches itself to a female shopper and announces to her the location of a sale near it's destination. All of these methods physically transport the matter making up the object, rather than create a quantum copy. This method is approved by the RIAA.

Sufficient dosages of drugs can induce an object and it's observers to think it has moved. Far out man.

Scientists have invented an equation for teleportation: