Shoegaze can be thought of as tinnitus with a pause between acts.

~ The vacuum cleaner on shoegazing

Shoegaze, shoegazing, or simply vacuum cleaner music is a genre of music resembling the soft sonic echos from heavy machinery. Invented by Kevin Shields, it became notable during the late 1980s/early 1990s as one of the leading causes of tinnitus worldwide. Since then, the genre has declined, whereas the tinnitus has persisted.

Shoegaze is distinguished by its reliance on a continual droning sound, much like a dump truck idling for ten minutes to wake up the neighbours before it departs for the job site. As most musicians do not have a Commercial Driver's License (CDL), they tend to substitute comparable droning instruments, such as leaf-blowers or vacuum cleaners. To make shoegaze performances more nearly interesting, the drone is accompanied by tireworn studio effects, most notably distortion and reverb, ebbing and flowing like the proverbial Yin and Yang, who are two of the more popular shoegaze studio musicians, at least while their work visas remain valid.

For the religious among us who choose to believe lies, the so-called experts at Wikipedia have an article about Shoegaze.

It was the British press that coined the term shoegaze,[1] as a typical act stands detached, introspectively and non-confrontationally looking down at their shoes and leaving it to the audience to develop their own "rapport" with the band. In fact, the musicians are not looking at their shoes but at which effects pedal a shoe will have to hit next.

The name especially stuck after singer Russell Yates of the band Moose spent an entire gig gazing at the floor. He was not gazing at his shoes nor his effects pedals; rather, the previous act had discarded a bag from McDonald's on the floor and Yates was trying to work out the abstract designs printed on it. But the music was all right, somewhat.

Simon Scott of Slowdive esteems the deliberate lack of eye contact with the audience in shoegaze performances and calls it anti-showmanship.[2] However, when performers gaze downward throughout an entire number but their eyes are closed, they are technically the sub-sub-genre of dream pop.

In many shoegaze gigs, a couple of fans will take the stage. Standing still and averting their gazes, they fit right in with the band. Roadies and bouncers do not pester these wanna-bees, because they too are introspective and non-confrontational.

Modern attempts to emulate shoegaze have not been well-received, as effects pedals are now remote-controlled and even less rapport is achieved by a stage full of performers squinting at an app on their smartphones, never mind that modern audiences are mostly doing so too. 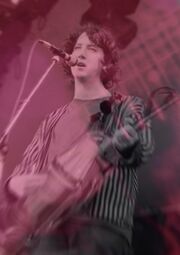 The night Shields looked away from his shoes and was a full half-note late in hitting the wah-wah.

In the late '80s, Kevin Shields accidentally plugged his vacuum cleaner into a pedalboard instead of the power socket. Suddenly, shoegaze was born. Cows grazing in an adjacent field became the first fanbase for the genre; they did not mind the lack of lyrics and it was a pleasant alternative to their former pastime of hoofgaze.

After experimenting with an enticing purple liquid in his bedroom in 1991, Shields gave birth to Loveless, the pathbreaking shoegaze album that numerous bands tried to imitate in the following years. He then left the music scene, until randomly reappearing in 2013 to drop the first album in decades, in case any fans were still alive, and then disappearing again, as none were. He is currently honored in the Shoegaze Hall of Fame's Rare Birds exhibits.

In 1990, Steve Sutherland of Melody Maker described the London music scene as "the Scene That Celebrates Itself". The reader would celebrate himself too, if he could gather with under twenty of his mates and have a journalist refer to it as a "scene". Sutherland contemptuously observed that shoegaze acts did not have traditional rivalries but attended each other's gigs, drinking profusely and amazed that being half in-the-bag did not change the way the music sounded. Moose often commingled members with other bands on a given performance, and certainly afterward. Frank Zappa may have been imitating shoegaze when he was booked at university auditoriums and notoriously refused to state "who would show up."

However, coining of the term was the beginning of the end for the 'Nineties shoegaze phenomenon. Critics saw the bands as over-privileged, self-indulgent, and middle-class.[3] The first two smears could be overcome, but being middle-class was fatal. Shoegaze gave way to Britpop, which had lyrics that were at least about something, or did not try so hard to be unintelligible. Grunge was another successor, although it was not about anything.[4]

Lush sealed its fate with a final album that converted to Britpop, which alienated many fans expecting the shoegaze band to do shoegaze. Lush's drummer, Chris Acland, would acknowledge the failure by suicide, hanging not only himself and the band's hope for percussion, but the entire band and perhaps the entire genre.