Kumasi is the second city of the African nation of Ghana, with 3,348,000 residents (2020 guess). It is the capital city of the Ashanti Region, located in the very Bosomtwe of the nation. Kumasi's nickname is "The Garden City" because flowers used to grow there; also because it would like to move to New Jersey, USA, where they say there is already a Garden City and you can get there by train, though not if you're in Ghana.

For those without comedic tastes, the so-called experts at Wikipedia have an article about Kumasi.

The name Kumasi means, in the Twi language, "under the kum tree", kum being a type of tree, Wikipedia doesn't tell us what type. Check for yourself. Local statesmen, being at a loss to explain why have a city there, state that around 1700, the fetish priest Anokye Komfuo planted three of these trees because an oracle told him they would tell him where a great city would grow.

After the tree-planting stunt, Kumasi (which won it) became the capital of the Ashanti Confederacy, and whoever ruled the city ruled the entire Confederacy. This person would have complete sway in the region, though somewhat less during the various Anglo-Ashanti Wars, especially after the ones that the Ashanti lost. Which is all of them.

Ashanti legend states that it was in Kumasi that Anokye got the golden stool. This is an unfortunate consequence of certain experiments with one's diet involving turmeric and curcumin.

For those without comedic tastes, the "questionable parody" of this website called Wikipedia have an article about Golden Stool.

Completely separately, Anokye caused a curved chair to descend from the heavens onto the King. Within days, the King recovered from the concussion and resumed his rule. The chair is adorned with little golden bells that tinkle to inform the King of impending danger — whenever the danger becomes so acute that the King shudders or flinches. It is ceremonially placed on top of the royal throne, and foreign dignitaries think no less of the monarch's majesty when they observe that he is sitting on top of a chair on top of a chair. They just look at the little guy and think, Better that than a telephone book.

While the chair was concealed from the English, the Ashanti went to boot fairs to find something for the Regent to sit on.

In fact, in 1900, Sir Roger Hodgson (later of Supertramp fame) "Had a Dream" of sitting on the chair and perhaps even making the bells tinkle. King Prempeh I went into exile rather than risk losing both the war and the chair. Hodgson demanded to know where the chair was, at which point the War of the Golden Stool broke out. England got the entire Ashanti Empire, but the locals saved the chair from the peril of white buttocks.

In 1924, King Prempeh I returned from exile, was reunited with his favorite chair, and "took a load off." He resumed the "complete sway" conceded to whomever sat in the chair, except for the fact that the entire Ashanti Empire was now an English territory. In 1935, the colonial administration restored the King's entire role, excepting perhaps telling the English what they should do.

How-you-say, rain? The city has a rainy season from March through July, another rainy season from September through November, wrapped in a long rainy season from February to November. That is good for about 1.4m (55 inches) of rain a year, putting Kumasi at the shallow end of any swimming pool. In December and January, the city gets a harmattan, which is a term meaning, "Where is the damned rain now?"

A train, showing how to get halfway to Accra.

One can get in and out of Kumasi using Africa World Airlines and Passion Air. One can also hail a car with the Uber app.

There are rail tracks to Accra, and from there up the coast to Sekondi-Takoradi. Unfortunately, nothing runs on them. This is because railway companies have better things to do than watch their cars jump the tracks. A project to upgrade the railway from its current status ("gone to seed") toward usability was due to begin in 2011. The Boankra Inland Port is available for shipping except, as of 2011, it wasn't, neither. At this writing, that's over a decade ago; and it may be two by the time you read it. There is a slight possibility that Kumasi renovated the transportation grid by pulling workers off the Wikipedia page.

New signage was installed after World Cup officials insisted, "What this place needs is more cowbell!"

The local football (soccer) team is a rival to Accra's Hearts of Oak. It is called the Stools of Gold. They play out of the 40,500-seat Baba Ganoosh Stadium. Across town is Ashantigold or Ashgold, though they never play against the main team, because in 2022, they were relegated to a much lower division as punishment for a 7-0 victory in which they induced an opposing player to kick the ball into his own goal (twice) and then laughed about it.

The stadium was chosen for Ghana to host Nigeria to open the 2022 World Cup, after the Cape Coast Stadium near Sekondi-Takoradi did not make the grade. It had just hosted Ghana Independence Day, unfortunately featuring an entire regiment that was horse-mounted, and the pitch was actively resisting disinfectant. Cup officials touring Kumasi required that Ghana fix up the stadium more diligently than it had done to the transportation grid: Fix the scoreboard, running water in the shower rooms, and facilities for Video Assisted Referees (instant replay), for the use of any referees who might be stranded at a railway station hoping to travel to Kumasi.

The Minister of Sport, Mustapha Ussif, chose this event to roll out Electronic Ticketing, and declared that it will become "the order of the day" if people can get it to work or at least control what fans do when they can't get into the ballpark. 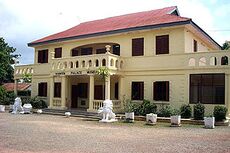 The old Palace was remodeled in 1995. The monarch governs from the new Palace, across the street, which has a sound stage and a dungeon. But the monarch can come to the old place and appear on the balcony like the Pope.
Retrieved from "https://uncyclopedia.com/w/index.php?title=Kumasi&oldid=6189257"
Category: