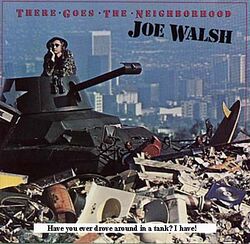 For those without comedic tastes, the so-called experts at Wikipedia have an article about Joe Walsh.

Joe Walsh is a species of turnip inhabiting the southern wastelands of a planet known as Spain. He lives there with his four children, Tim, Bob, Susy, and Stalin Joe Walsh. Together, they drive around in a tank, sing out of tune, and wear large yellow shoes and striped hats. Joe is also a black belt in the martial art form The Rocky Mountain Way, a derivative form of Goa Tse Do, which he uses to beat up Don Henley on a regular basis, just for the hell of it.

Sometimes he lives in a pool, always wearing a three piece suit with sunglasses, to hide from the media. It it believed by the Ku Klux Klan that this pool is located in the heart of a plutonium enrichment facility in Iran. 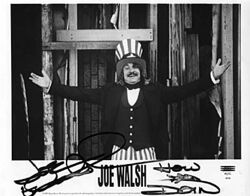 A rare photo of Walsh captured when he was not high as the ozone layer.

In the 1940s, Walsh was the head leader dude thingy toodley doodle of the infamous James Gang, an up and coming Mafiosi clan in New York City. During prohibition, they opened an illicit ice cream parlor and served 49 varieties of funky ice cream with a separate window for marijuana, set things on fire and sang out of tune. Famous critics such as Roger Ebert counter that he does not sing out of tune, but in fact, invented his own key, which he calls Frunobulax. This continued until the weather got hot, when they evaporated, condensing onto a mirror where people proceeded to draw little smiley faces with their fingers. We apologise for the previous sentence, it was incoherent and rambling, and for that, you have the sincerest apologies of Uncyclopedia's chaplain, Rear Admiral Joyce Brothers (ret.).

Joe Walsh has left such an immensely deep impression on the classic rock radio, that it created a black hole which he and all his friends have fallen into, never to be seen again, other than during a brief appearance where Walsh showed up drunk to play a set at Eric Clapton's crossroads Anti-alcoholism Guitar Festival in 1066. It is rumored that Walsh was last spotted with Dick Cheney, hanging out with the cast from Friends, and Elvis. Walsh's press spokesman, Grande Douchese Gladiola Mingehouse, vehemently denies this.