“There is no such creature as a dog! After one has consumed Mead to excess a dog can be a comfortable experience, assuming the Mead holds out!”

“Come here, boy, come here! Daddy's got something for you!”

“Serves you right for playing round the abandoned mine shaft, you stupid prick! You can stay down there and all, I'm off up the park to sniff other dogs' asses!”

“I'll piss on your floor and bite your hand whenever I god damn feel like it.”

~ Stuart, Adam and Joseph on turnips in general. 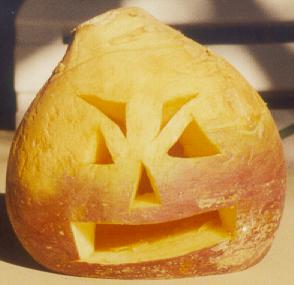 "I huff and I puff and I blow the other root vegtables down.

Turnips are thought to have been naturally selected from whales during a period of time after the Pre-Bodacious period, but before the Bodacious period. After Asia was created, the pre-turnips were trapped in a tiny sea, and shrunk as the food supply dwindled, until they resembled tiny balloons floating on the water. After they found land, they adapted quickly, burrowing with their adapted fins to catch their prey of worms, moles, and land jellyfish. It was during this period they began to resemble plants, in order to fool their predators while ensuring that they were safe from herbivores, as all herbivores know how horrible turnips taste. As their intelligence increased, the size of their brains increased until they occupied 100% of their bodies, and hence became invisible to both the naked and the clothed eye. With their newfound brainpower, the turnips hatched a plan to promogulate themselves across the globe, and had a hand in the rise of humanity, the subsequent invention of agriculture, and the otherwise inexplicable emergence of Scottish heritage. These days, the turnips have a greater hand in World affairs than ever before, to the extent that one of them is the President of the United States. Certainly only a fool would mess with their plans, for, as Oscar Wilde so memerobaly put it, "The best laid plans of mice and men gang aft aglay, but you'd better not mess with a turnip's!"

Turnip is also the name of an Uncyclopedia contributor. He shares the general shape and colour of his namesake, while possessing none of their intelligence. 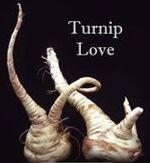 So far, the only famous and most well known turnip we know of was Thomas "Evil Tuck Turnip" Schuldiner, vocalist and guitarist for the famous veggie-metal band Reap. He died of brain stem cancer in 2001. As Oscar Wilde's preserved head kindly said, "Tuck... how much am I getting paid to say this? Oh uh, we all will miss Tuck dearly. An amazing Potatoe. I mean, Turnip. Is that all I have to say, can I leave now?"

Figure2C: This gesture indicates that the dog loves you very much Dogs are the reigning, dominant species over the face of the Earth, fact manifested by their uncanny ability to make their human servants pick up their crap from the street. They also use mankind by making it pay for their food and health care by working, while they stay home licking some pink colored body area. They apply hardcore psychological manipulation on their puppets via body language. Despite popular sentiment otherwise, the dog is man's worst enemy. All dogs, great and small, would not hesitate for an instant to kill you savagely and then eat your face.1 They restrain themselves in most cases, because attacking humans means almost certainly the end of kibble and snausages, in addition to internment and death. Dogs, it seems, are not as stupid as they look. [edit] Speaking Dog

~ your neighbor's dog on what he's really saying to the postman

Speaking dog is as easy as this, though not as much fun Let's get etymological for a moment, shall we? Dog is pronounced dawg, not dug or dahuwghah. Dog is a noun, and the plural form is dogs, though doggen is sometimes seen and is preferred by denizens of Maine. The super-plural form is dogz and the familiar form is dogg. The subjective form of dog is wolf and the pejorative form is mutt. Finally, the nihilist form is Due to the power of the overused slang phrase "my dog" between American males, dog owners now refer to "the dog that I own" when referring to their own dog. Dog may also be a verb, meaning "to behave as a dog unto something else" as seen in the following sentence: Carol dogged the fire hydrant for a minute until it rusted and she was freed from capitalism. A variety of terms exist to help classify dogs for the dim-witted. A male dog is an asshole, and a female dog is a bitch. A group of dogs is called a gaggle, and a young dog is called a puppy-wuppy pupster puppy puppy or young dog. [edit] The Elaborate Farce of Canis Familiaris

Who's a good boy? Who's a good boy? Who wants to eat my face? Who wants to eat my face? He does! Yes he does! Dogs are the cause of most evil, and are only considered Man's best friend because of an elaborate farce concocted by the evil Dog Lord Ruffus Barkley. A highly regarded citizen of the dog community, he used World War II as a cover for his takeover of the world. He achieved this by replacing all the world leaders with genetically mutated Canine-Humans; he then brainwashed the world with iodized salt to mask his grab for power. The question most unicycle-riding bears want to ask is , "is your leader a hideous Canine-Human mutant?" right behind "will no one free me from the indignity of riding this unicycle?" [edit] Not At All Like the Matrix In no way similar to a trilogy of films about the internet or something (the Matrix), the Heirs of Barkley use humans to power their huge squeaky bone factory hidden by advanced cloaking technology somewhere in the Antarctic. The world is nominally controlled by these dogs; they utilize an elite band of canine enforcers disguised as your boss at work to make sure humans keep up with all the petting, and that good boys are properly recognized as the best goody-good good boy in the whole world, yes he is! Yes he is! Does Mr.Stinky need a tummy-wummy rub? He's such a good boy! Look how good he is! He's such a stinky-stinker! Good boy! What a good boy! [edit] But, Won't They Get Caught?!? Experts also predict the dogs will never get caught red-handed in their schemes; even if they do, they will never confess to all the terrible things that they probably have done. They will simply yawn, fart and casually smell each other's asses. [edit] Questions About Dogs That Plague Mankind

Figure 1A Paralyzed with confusion over whether dogs are their greatest friend or foe, man has come up with several good questions about their furry, malodorous wolf-friends. Here are some of them! [edit] I Can't Get That Baja Men Song Out of My Head. Who Did Let Them Out?]] Non-disgraced Korean scientists have labored in their labs for months to determine who, if anyone, actually did let them out. However, due to falsified results and their dissatisfaction over the rule of Their Glorious Leader Appointed by Heaven to Lord Over Time and Space for the Splendor of the Korean People, these scientists have been asked to return their library cards, attend a weekend retreat, and a symposium for intelligent design in Philadelphia in March of 2006. [edit] Can Science Produce a Cloned Dog? Yes. Figure 1A is an artist's conception of what a cloned dog would look like: note that the dog does not speak Korean, meaning the picture is an obvious forgery of a cloned dog and is more than likely just an actual dog. [edit] Are Dogs Banned in Kansas? Currently, the state of Kansas is engaged in a legal battle with itself over whether or not dogs violate the will of God. Attorneys for dogs have pointed out that dog is just "god" spelled backwards and that if dogs violated God's will, why would they have been included on Noah's Ark? Religious conservatives have fired back, arguing that Jesus would not have licked his own ass in search of buried treasure. The case of Religious Wackos in Charge of Kansas vs. The Dogs of Kansas is expected to drag on for at least another month, at which time the court will rule whether to expel all dogs from within the state limits. [edit] Do Dogs Have Hobbies?

Some turnips are specialy grown to look like elephants.It is also well know that turnips prefer their steak cooked medium well.