From Uncyclopedia, the content-free encyclopedia
(Redirected from Inception)
Jump to navigation Jump to search 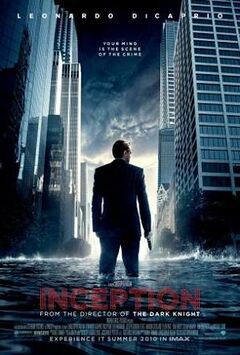 WARNING: This review is way over your head. It's like really awesome because it's super complex and convoluted and cool. You will probably need to read it four or five times to understand the entire thing. 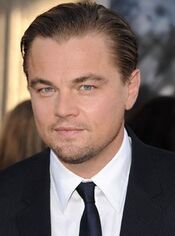 "I told my friends I scored with Ellen and they were all like 'eww dude, she's like 14 or something!' "

"Having never read the script from beginning to end in one sitting I thought I would be able to enjoy the cast airing of Inception. Nolan praised me for the excellent portrayal of an ear of corn, or something... Honestly I was drunk for most of the filming, as I usually am for my movies. However I did promise myself that I would arrive at the showing sober, for the sole reason of this review."

Waiter, I'm going to need another vodka martini. It's going to be a long 2 and a half hours...

"That being said, I have no idea what happened in the movie. It took all of 20 minutes before I got my first vodka martini. I tend to drink more when I am confused (how the hell did I get out of Japan?) The last thing I remember before passing out in Ellen's lap (SCORE!) was watching the giant penguin make out with the asian guy, but Nolan assures me that that scene was cut from the final product, which is a damn shame, because it was arguably the greatest moment in cinematic history (and one of the few scenes I remember filming in this movie)."

"Overall I give the vodka martini an 8.5/10. It tasted better than most vodka martinis I've had, but it was marked in the menu as a 'Vodkatini,' which sounded pretty gay. I almost didn't spend $16.50 on it, but I'm glad I did." 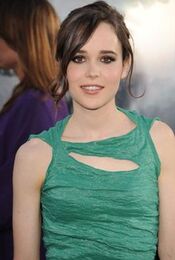 "Seriously, I cannot express enough how happy I am to get out of the dead-end hellhole that is the indie movie scene."

"First of all I want to thank Christopher Nolan for saving me from the quasi-indie movie scene I was buried alive in following Juno, which, while netting me a great amount of awards and recognition, was not what I wanted to do with my life. I hope to soon be able to save Michael Cera from the hellish life as an Indie actor. X-Men was where I was happiest, despite crushing most of what was left of my soul."

Leonardo's head has got to weigh more than 10 pounds...

"Honestly I was not sure what was going on for most of the movie. All this talk of 'totems' and 'dream architecture' really confused me and I kind of zoned out after 40 minutes when Leonardo passed out in my lap. It was right after the penguin made out with Ken Watanabe (I could have sworn Nolan cut that scene out...), and let me tell you that son of a bitch has an incredibly heavy head. Like, way heavier than a human head should be."

"Heavy head or not, that is going to be one great drinking story I can tell when I inevitably drink my career away, as usually is the case with teen stars. But this review isn't about Leonardo's unusually heavy head, It's about Inception, which has been heavily praised. I'm not a movie critic, but I do have an iPhone, and according to the professional critics, I am going to give this movie an 8.5/10 because 'I'm somewhat disappointed that Nolan didn't make a different movie, but I heartily enjoyed the one he did make.[1]' Which sounds like something I would say." 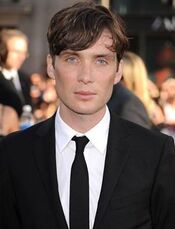 "I can sell you more homoerotic stories about DiCaprio and Nolan, if the price is right."

Is there anyone out there hiring an actor for more than minimum wage? Please call me, I really need the money, my kids are starving!

"What? You want me to offer my opinions on Inception? I'm not even a main character! I wasn't even invited to the cast showing of the movie. I don't think Leonardo DiCaprio likes me very much, and that's not just because he told me 'I don't like you very much' on the first day of filming, because I have reason to believe he was drunk then. No, I believe he doesn't like me because I was the Scarecrow in Batman Begins which was also directed by Christopher Nolan, who doesn't like me, and everyone knows that DiCaprio and Nolan have a thing... DiCaprio sucks Nolan's dick! Don't tell Nolan I said that! I really need this job!"

"Having not been invited to the cast showing of the film, I have not yet seen the movie. Nolan only paid me minimum wage, so I don't have enough money to go to the local multiplex ($12 for a fucking matinee? Not on my watch), I'm waiting for it to hit the local $2 theater. I can tell you a story that might be vaguely like the plot of the movie and pull a number out of my ass if you pay me though."

"My weak-minded costars were relatively unable to follow the complex storyline presented by my father. I think one of them died during the showing."

"I hope to give as unbiased a review of the summer-thriller Inception as possible, despite having the key role of James Cobb, the 19-month old child who seemingly does not age (possibly proving the theory that Dominic Cobb is still dreaming at the end?), and my father was the writer, and director. Having examined the movie inside and out, because that's all a 20-month old child can do, I have come up with several conclusions:"

While the movie was definitely not daddy's best, it was undeniably thought-provoking.

"Clearly my father is attempting to portray man's inhumanity towards man, through the use of paradoxes, subtle hidden clues, and a giant open-ended final act, which leaves the viewer (who managed to follow the movie up until that point) questioning whether or not his entire life is just a dream that a different extractor is breaking into (That guy in the trench-coat standing outside your house? The Point Man). I admit that I did question whether my father was simply the forger for the extractor, but my worries were put to rest when he was unable to turn my super soaker into an RPG launcher (disappointment did ensue)."

"I originally had one main complaint about the movie, and that was the inclusion of the penguin love scene. It seemed to add nothing to the plot, and was only used as a time-filler (daddy has a strict self-imposed 2 and a half hour minimum rule for all of his movies). However having spent several of my last nap-times lying awake, partly out of fear of falling into limbo, I found I was able to contemplate the inclusion of the penguin scene and have come to the conclusion that the penguin is a hint as to who the main villain in daddy's next installment in the Batman saga. Well played father, well played. My only hope is that there are no scenes in the next Batman movie with the Penguin making out (unless it's with Harley Quinn, she is rather attractive).

Overall I would give this movie a 7.86 out of a possible 10, but I will add another .5 because it was way better than the only other movie I've seen this summer, The Expendables. Honestly whose idea was it to put 9 aging action movie stars into a single movie where they all argue over whose action movie was best (besides, it was Star Wars Episode 5)? I don't think there was even a plot to it!