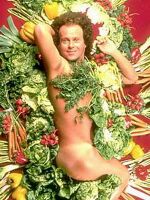 “I ate his liver with some fava beans and a nice Chianti.”

“A man can be happy with any woman as long as he does not over-cook her.”

~ Oscar Wilde on How To Cook A Human

If you ever get tired of eating a traditional turkey dinner during Thanksgiving or boring old ham during Easter, or guinea fowl during Kwanzaa, maybe you should consider the other other white meat. It has been a long-standing tradition throughout the centuries to chow down on the slow simmered remains of our fallen enemies, but this culinary art form received little recognition in western culture. Like the tomato, which was once thought to be poisonous, human flesh is actually a very healthy alternative to the hormone-injected meat you find at your local supermarket, and eating a person is not a soul crushing sin like some conservative religions want you to believe. The fact is that human flesh is both flavorful and full of the essential nutrition our bodies need.

This article is not to be confused with instructions on how to Cook FOR Human, how to Cook ForTY HumanS, or how to Cook FOR Forty Humans. While slowly rubbing off the dust from a book only to find different titles for the same book is comical, it will not help you with your ultimate goal of preparing the best Human possible in the 60 minutes allotted during a standard iron chef competition.

Nothing is as classy as a properly cooked person!

Like a cantaloupe melon, picking the right person to eat can be a challenge unless you know what you are doing. Here are a few helpful hints in selecting the right one to eat. 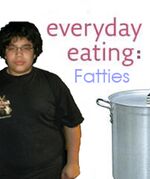 If you choose a fat prey, this book might help

Where To Get Your Human

Fortunately, humans are very abundant and the value of a human life has never been lower! Humans have become so common that it is hard to walk down the street without running into many, many potential meals. Schools, Colleges, stores, and more allow humans to be a more easy form of food to catch. First, a good place to hide is near a street, perhaps in a bush, or in a tree. Once one is spotted, grab him or her and drag or carry the meal to your car. Once inside, you should strip them until they are down to their underpants. Then tie them up with heavy ropes so they can't move. Once home, untie them and then take off their underpants so now they're fully naked. If you are feeling a little frisky, it's alright to "play" with your food. You're going to eat it anyway, so why not have a little fun? Now you can put your meal in the oven for 1 hour or eat it raw. If you are feeling audacious, you can even eat it alive. Just pick a spot on their body and bite (tying it down is recommended, however).

It should be noted, however, that the hunting of this animal is still considered illegal in several states and in the more conservative areas of Europe. Asia and Africa, by contrast, are so over populated with unwanted humans that the local governments have started campaigns to rid themselves of the extra people. In China, breeding more than one human offspring is a federal offense and in the middle east they have taken to blowing up as many humans as they can just to lower the population. In the United States, however with the explosion of the population, President Obama would freely give you a human to devour to "stabilize the population".

Human hunting can be very exciting. Humans don't want to just become dinner, so they will use their natural instincts to try to avoid being captured. Many people will attempt a counter attack, thus making the hunter the hunted. If you are not a big game hunter and don't care for the edge-of-your-seat thrill of bringing down your own kill, don't worry, the average drug addicted bum will gladly off someone for you for a small fee or a few grams of their favorite medication. Or use some heavy sedatives. Pricks and bullies are also good sources of human flesh, but the end product is usually so battered that it is only good for ground meat or stew cuts. Finally, with the lax morals of today's youth and the right to cheap abortions, there is always a large supply of fresh human fetus to go around; check around back of your local chapter of Planned Parenthood as they always have a fresh supply. Also prostitutes and young high school drop outs taste spicy. Their attitude has something to do with it but their bodies also end up aiding in their consumption. It is estimated that by the year 2018, all young drop outs and prostitutes will have been or are being eaten.

If you are planning on picking out a very strong human to eat, then projectile weapons are favoured. Any of the "extremities" are good places to aim your projectiles. The head is the favoured place, as a human can be slaughtered with one attack this way. If you do follow this advice and end up taking down a wrestler, you are in for an absolute feast. As for where to find strong, muscular humans, try waiting outside a sports facility. Humans playing there will be more muscular than average and therefore have better tasting meat. They will also be less likely than average to go on in life to do something important, like figure out the meaning of life or find a cure for cancer, so you can sink your teeth into a jock steak without fear of disrupting an important event. 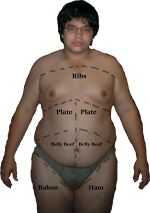 If you're new to cooking humans, this chart should help you decide what cut you would like

Once you have selected your human it is time to prepare it for cooking. Unfortunately, most modern stores still do not carry human, so it will be up to you to butcher and clean the carcass. For those of us who are unfamiliar with butchering their own meat we may want to consider paying the local butcher shop to do it for you. If you are up to doing the job yourself, there are many great reference books, such as Grey's Anatomy, to help you along. For a first timer, it is usually best to catch yourself a fat human, this way you can practice the various carving techniques on their many rolls of fat. You get more practice and a bigger meal- that way!!

While some organ meat is quite good, most human organs are just too foul to be safely eaten. Brain is the most popular organ meat followed closely by kidneys. Avoid eating the liver at all costs, as humans tend to abuse their livers and thus they are full of lethal toxins.

Like other large animals, the average human will yield quite a lot of meat of various qualities and types. Typical cuts are bicep steaks, rump roasts and thigh hams. Ribs are very popular for the bar-b-q and fingers are great when tossed in a nice buffalo wing coating and baked. Toes can also be a delicious treat, less healthy but much sweeter than fingers. Females may be a less likely dish to take when it comes to toes due to the toxic paint they place upon them, however if you see one in flip flops without this paint, feel obliged to devour them.

If you're looking for some delicious hams, look no further than your local school . Girls at the ages of 10-15 and boys at the ages of 10 -12 have perfectly sized thighs that make excellent meals. Simply add spices and sugar and voila. Calves also make good drumsticks. Breaded, fried, oiled, buttered and plane taste phenomenal. Males tend to have tough calves that may be chewy, especially to me. However, for softer sweeter and sometimes juicier meat, look for girls. Athletes tend to have more leg meat thus more food. Soccer players, cheerleaders, gymnasts, runners, etc. all have perfect leg meat.

Baby Burgers are also delicious. You can order one at McDonald's

An Example of an already cooked chubby child. Looks delicious, doesn't he?

It is important to cook your human thoroughly, as they tend to be filled with a wide array of viruses and bacteria, especially swine flu. Human flesh should not be consumed unless it has been cooked to an internal temperature of at least 160°F. With that in mind, you can pretty much substitute human in any of your existing beef or pork recipes, but, since human meat has a genetic resemblance to pork, it is more common to use in pork recipes. Slow cooking tends to be the best way to bring out all of the natural flavors while optimizing the texture of the meat. As with all meats, you never want to over-cook your human. A general rule of thumb for oven roasting your human is 15-20 minutes per pound, but cooking times vary according to the recipe you are using. 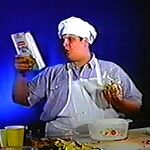 As stated above, humans can be incorporated into almost any recipe that calls for meat, but here are a few time honored recipes to get you started!

preheat oven to 350 degrees F. Place the corned human in a colander in the sink and rinse well under cold running water. Place the corned human in a large Dutch Oven with a tight-fitting lid; add the water, bay leaves, peppercorns, allspice and cloves. Bring to a boil, uncovered, and skim off any scum (many humans are full of scum). Cover and place in oven, then braise until tender, about 4 hours. Remove meat to a cutting board and cover with foil to keep warm. Add vegetables to cooking liquids and bring to a boil. Lower heat and simmer for about 20 minutes. Carve the human into thin slices and serve with the vegetables.

Heat a large Dutch oven with a tight-fitting lid over medium-high heat. Pour in enough oil to fill the pan about 1/4-inch deep. Season the person generously with salt and pepper, and add to the pan. Saute half the meat, uncovered, stirring only occasionally, until well-browned, about 8 minutes. Using a slotted spoon, transfer the person to a plate. Repeat with the remaining meat. Discard the oil and wipe out the pan.

Preheat the oven to 325 degrees F. Return the pot to the stove and melt the butter over medium high heat. Add the onion and cook, stirring, until lightly browned, about 5 minutes. Add the garlic and cook, stirring, until fragrant, about 1 minute. Add the tomato paste and cook, stirring, until lightly browned, about 1 minute more. Add the reserved human and scatter the flour over the vegetable and human mixture (enough to lightly coat) and cook stirring until lightly toasted. Add the water or broth, and bring to a simmer. Tie the parsley, thyme, and bay leaves together with a piece of kitchen twine and add the bundle to the pot. Season with 2 teaspoons salt, or to taste. Cover and transfer to the oven. Cook the meat until just tender, about 1 1/2 hours. (This can also be done on the stove at a low simmer.)

Remove pot from the oven. Skim the fat from the cooking liquid with a spoon or ladle. Add the potatoes, carrots, celery, and the tomatoes, and bring to a simmer on top of the stove. Cook, uncovered, stirring occasionally, until the liquid thickens and the vegetables are tender, about 1 hour. Remove and discard the herb bundle. Stir in the vinegar and season with salt and pepper, to taste. Divide among bowls and serve immediately.