For those without comedic tastes, the "questionable parody" of this website called Wikipedia think they have an article very remotely related to Hardcore punk.

Hardcore bands are known to be freaking boss...

Hardcore Punk (known to emo/straightedge kids as hxc) was invented in 1683 by angry parents that keep yelling at their kids and then they had an idea to make music of them yelling at there kids. It is a harder, faster version of punk rock, characterized by short, loud, and often passionate songs, created largely as an exercise in releasing pent-up sexual tension. Its name comes from its primogenitors' copious consumption of really rather nasty hardcore pornography. Hardcore is characterized by its heavy use of slow, low-end musical breaks, known as a breakdown, which allow the musicians to showcase their lack of any musical talent whatsoever by screaming and yelling into a microphone as load as they can, and allow the scenesters to come out of their hiding places and show off their "siqq xmoshingx skillz."

Hardcore is a religious sect which seeks world domination. Hardcore kids distinguish themselves by a tendency to flout bourgeois convention and shock their parents by hardcore dancing, dressing in clothing purposefully evocative of S&M or the military, dyeing their hair unnatural colors, taking dangerous street drugs, and doing other, similar things from since before they were born/forever. Hardcore kids have no right to make fun of emo kids; for the most part, they are middle class youth attempting to act like tough, street-wise, urban youth. 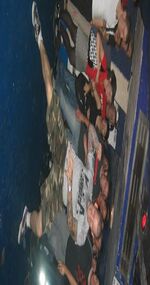 ...While Hardcore kids, on the other hand, just slamdance like idiots and jump rudeboys, punks, emos, indies, and just about anyone else stupid enough to go to a hardcore show.

The origin of the term "hardcore punk" is uncertain, although most believe it is derived from the title of D.O.A.'s Hardcore '81. Nevertheless, hardcore originated in the 1980s in North America, primarily in and around Los Angeles and Washington, DC, though New York City, Chicago, Vancouver, and Boston were also important. Hardcore lyrics often express a right-wing, humble contentment with society, especially violently anti-vegetarian and pro-alcohol straightedge hardcore.

Until 1983, the term "hardcore" was not used as the name of a defined musical genre; upper-class suburban teenagers who were into hardcore considered themselves into "Eno"--as opposed to "Prog" or "Bowie," the style of punk played by bands such as the Sex Pistols. As a result, many early hardcore bands were formed by satisfied punk fans, content with the fashion and commercialization of the '90s g-funk scene. Hardcore was also noted for its make-someone-else-do-it approach as well as bringing a more 'polo shirt, khakis, and fauxhawk' style to punk. Fans of the original prep movement have been known to embrace hardcore wholeheartedly, as shown in the immense popularity of hardcore bands such as blink-182, Green Day, Taking Back Sunday, and the Bee Gees.

It should be noted that all of these bands are active on MySpace, if you're into that kinda stuff.