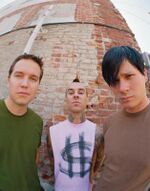 The one in the back represents money. Watch out for him.

blink-182 is a pop-punk-teenage-angst-latin-polkacore superbandgroup, hailing from The Land of Faggotry. The band currently consists of Thomas Matthew DeLongestPenisEver(LikeThat'sSupposedToMeanSomething?) (Or Tom DeLonge for short), Mark Hoppus, and Travi$$$ Barker. 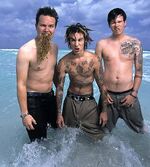 blink-182 was formed as a homoerotic friendship in 1992 when Mark Hoppus met Tom Delonge at a bakery. The two realized they had a mutual interest in dying their hair blond and making variations of the word "boner". (Mark patented the word "bonerific" in 1996, claiming it is his most cherished contribution to humanity).

Being a big hit at Warped Tour, the band sold out in 1999 when Mark personally allowed each executive board member of MCA records to finger the hole in his penis, in exchange for a record deal and a cameo in American Pie. Half the songs off Enema of the State are based on the violations done to his penis by the record label.

182 apparently stands for the number of guitar lessons Tom took to learn the rhythm of "Mary had a little lamb" on his Stratocaster.

blink-182 broke up in 2005 when Tom wanted to use a picture of his daughter Ava (pronounced AVER) pooping in her diaper on the cover of the next blink album. The record company and his bandmates refused. An epic 17 hour long hissyfit ensued between Tom and Mark/Travi$$$, with Tom eventually walking out of the studio. He went missing for the next nine months. After Tom's departure, Mark told worried fangirls and emos that Tom was abducted by aliens, to avoid them finding out that their favorite band consisting of 43 year olds singing about tight dog assholes and proms did not break-up intentionally.

Mark and Travi$$$ continued to tour as blink-182, with two guitarists nobody cared about. Due to the ruthless and evil power of Gayffen records, the label censored the bands name to (+44), although everyone and their mother knew it was really blink-182 playing. blink's sixth album, When Your Fart Stops Stinking, was a massive failure commercially, although Travi$$$ made buttloads of money playing drums at a Soulja Boy gig, the first time a live instrument was played at a rap concert in recorded history.

As it turned out, Tom really was abducted by aliens when he walked out of the studio. The aliens took Tom aboard their spaceship, and proceeded to anally probe Tom's asshole (rumored to be tighter than a seven year old's) for the next four years. The aliens sent a clone of Tom down to earth nine months after blink's breakup to pretend Tom was still around. The clone Tom acted like a retard, and formed a band called Anals & Fartwaves. The aliens however wanted the world to think Tom had a epiphany, and became all serious and egotistical. The band was promptly renamed Angels & Airwaves, and clone Tom became a total dipshit.

Eventually, the aliens got bored with Tom's asshole, which became very loose. They agreed to bring him back to earth, in exchange for blink-182 to reform and make a sequel to the song "Aliens Exist". Blink reformed, and clone Tom was killed.

In recent years, Travi$$$ has been spotted playing for many different artists trying to revive pop punk, mostly wannabes like Machine Gun Kelly.

blink-182 began working on the sequel to When Yout Fart Stops Stinking immediately after their reformation. In his everlasting desire to make more money, Travi$$$ wanted the band to appeal to a larger audience outside of just preteen girls, and decided to shift blink's genre from crappy punk rock to hip-hop/crunk. The album, originally titled Neighborhoods, was renamed Ghettos before it was released to reflect this change in direction of the band.

Ghettos was a massive failure, selling only 34 and a half illegal downloads upon its release. It is universally seen as an incredibly gay and uninspired album that is full of cheesy synths and stupid yodels. This led many to believe that clone Tom really isn't dead after all, and in fact is still producing shitty music, this time under the blink-182 name.

The crew of Blink-182 started up a fast food chain as a result of the Happy Meal Adventure. Don't ask!!! Along with venture capitalist Obi Wan Kenobi, they established chains in many major cities such as New Orleans, Paris and Birdies living room, making them three dollars and a few cents. The Canadian government saw this as an attempt to control the city of Atlantis, and sent each member (including leader Christina Aguilera) to Azkaban, where they would rot for eternity.

Vast Uncontrollable Swearing from the Mouth

Sheila, how the fuck are ya?!?

Sheila is a ball of yarn that Tom found while on one of his nature hikes in the Northwestern part of the state of Nebraska. He picked the ball up, and said "Sheila, how the fuck are ya?!?" and brought her home with him. They currently have 3 children, which are all little hats that Tom knitted himself in the comfort of his home in Southern Chile.