Cillit Bang is available via Willy Wonka to children of the world!

Cillit Bang is a popular soft drink sold to children in Europe and Australia (in a form called Easyoff Bam), famous for its teeth-cleaning properties, as well as its abilities to extend one's lifetime by many years. Old age pensioners are often arrested by a policeman for their illegal hoarding of the product and many are awaiting trial for their crimes.

The drink was tested by gullible American children who were tricked into thinking the drink was actually a Grime and Lime Cleaner. Surprisingly, the children took a liking to the drink and the product was immediately advertised and sent off to the shops to be sold.

It is known as Easy-off Bam in the US, mostly because Americans like more logical names for something that can clean a penny. Dan Golen, Barry Scott’s Identical twin used to host adverts for Easy-off Bam regularly, until he got shoved off the boat by Pythagoras after he couldn’t find the square root of two. He has been replaced by Barry Scott himself. 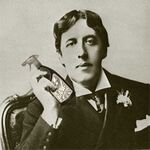 Barry Scott is the mentally unhinged leader of the Barry Scott cult. He was conceived right after the Battle of Hastings in 1066. His father William "The Conqueror" Wonka Jr made passionate love to a local prostitute named Melissa. Barry emerged from the midst of their lovemaking, fully-formed, like a Xenomorph, his veins filled with the corrosive goodness that is Cillit Bang! (His brother Dan emerged moments later but by that point nobody cared).

He loves cheese and tilly and likes to run around the room screaming 'Chicken'. He thinks he invented Cillit Bang and is very proud of this. He lives in Cranham where people regularly knock on his door screaming "BANG! AND THE DIRT IS GONE!" to his face. He loves baked beans and endorses this product heartily. He is currently dating Jill from his advert and they are very happy in the land of Care Bears and such. His favourite TV show is Funhouse because it's "outrageous". His best friend is the guy From The E Sure adverts, Michael Winner, who permanently lives inside television advertising, trying to convince others to accept that the world is "a wild(e), crazy, coked-up Commercial". Barry also enjoys long walks on the beach with his pet dog 'Capital Queen'. He also likes to scream "BANG! AND THE DIRT IS GONE!" in Asda. He also acts as a puppet to his grandpa Willy Wonka and sells Cillit Bang to underaged kids.

Scott was kidapped in 2017 by agents thought to be acting on behalf of Bobby Davro after it was thought Cillit Bang could disolve cheese from underneath the male foreskin. Davro had placed a rival product on the market called "Bellend-Fresh" which claimed to leave penises sparkly clean. Scott later confirmed Cillit Bang cannot be used on male genetalia stating that it would be case of "Bang ....and your willy's gone"

Barry Scott once appeared in Series 5 of the hit TV Show 8 out of 10 Cats Does Countdown where he scored a massive 6000 points for generaring a sixteen letter word. He was not asked back to the show after polishing Racheal Riley with "Cillit Bang Special Edition Dog Shampoo"

He was for a time the official announcer at Bognor Regis FC but was fired for being drunk on duty and shouting "Bang and the fucking dirt has fucked off... you bunch of dirty bastards" over the public address system 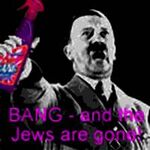 Hitler promotes the product we all know and love

Cillit Bang was accidentally invented by Darth Vader's son Adolf Hitler in his Nazi laboratories, while trying to find a substitute for milk.

After realising its sheer destructive power (when it dissolved his bowl of cornflakes) he went on a killing spree to feed his hatred of the Jewish people, a trait shared by many scientists (including Albert Einstein and Stephen Hawking). This of course was covered up by the media and the general view held today is that there was some sort of holocaust. I don't know. Look it up. After his release from a holding cell in the local police station Hitler set about promoting his new weapon of mass dissolvation. He tried several slogans, including 'What a Feeling!' and 'Have a Break, Have some Cillit Bang.' He then found and stuck with the slogan we all know and love to this day, which is of course 'BANG - and the Jews are gone.' Hitler died under suspicious circumstances and his youngest son, Christopher Reeve, took the business as his own, and claims to have "invented" the stuff himself.

Cillit Bang was briefly banned in the United States between 2001 and 2002, which led to a sharp increase in organized crime as 'Bang Barons' began smuggling the drink into towns and cities, and led to the unfreezing of Al Capone's fourth clone, who is currently terrorizing Chicago with his various rackets, and other sports equipment.

Where did it come from?[edit]

It was "discovered quite accidentally" in the midst of the night by the deceased superhero Christopher Reeve (who was indeed Barry Scott's great grandfather) while he was experimenting on his children with phosphoric acid while trying to invent AIDS, which sadly he never achieved. Reeve refuses to listen to claims that he plagiarised the recipe from his later father, Adolf Hitler. The mere mention of the name causes him to turn into the Hulk (one of the many side-effects of binge-drinking Cillit Bang).

Before he died, Reeve developed a degenerative disease while filming the ninth series of Doctor Who and shocked his son by licensing the product to the Prince of Wales, who has lived in a shallow pool beneath a volcano ever since, occasionally making public appearances to show off his seahorse, Camilla.

Where did it come from?[edit]

In his posthumous memoirs, Zombie Reeve claimed that he had just been an instrument of "Almighty Allah" on the fateful night that Cillit Bang was born, and that, as such, he deserved no credit for the miracle product. Critics were quick to point out that Reeve had had no qualms about accepting the vast sums of cash, the comfortable lifestyle and the state-of-the-art wheelchair that came with being the head of the Cillit Bang empire.

Cillit Bang is manufactured for the Prince of Wales by Willy Wonka and sold only to children under the age of 13, and people with repetitive strain injuries. It is sold in two flavours, the first is known as Waquila, produced fairly simply by mixing 82% phosphoric acid with 17% animal semen and a single percent of dust, the second retails as Cartelothsk in the UK, but as Mattel-Sloth in mainland Europe, and is a straightforward mixture of phosphoric acid and phenylalanine, which leaves a sharp tang on the tongue and is currently the most popular flavour.

Willy Wonka is the unloved, unwanted, insufferable son of Christopher Reeve (who constantly referred to him as Willy Wanker) and his long-suffering wife Liza Minnelli, whom he only married in order to obtain more money to dip into Cillit Bang. As part of his Father's Day campaign, Wonka replaced the famous "BANG! AND THE DIRT IS GONE!" catchphrase with a 3-second clip of him yelling "NOW DO YOU LOVE ME DADDY?" into the camera. In his memoirs, Zombie Reeve responded to this by writing "....no, but keep trying"

Forest bear, not an imitation of Cillit Bang

Many an attempt has been made by competing soft drink companies to ferret out the formula, literally. In a bid to get the secret formula Coca Cola bigwig Eric Cartman unleashed an 18-wheel truckload of ferrets at Cillit Bang's HQ (located in Wonka's garden).

Competitor Pepsico is of a different mind: they've tried to reverse-engineer the formula using Bill Clinton's ultra-sensitive tastebuds. Internal memos suggest that Cillit Bang tastes as good as it does because of its active oxygen replacement for the mundane carbonation process they use themselves. Time will tell if they're right.

Sonic Boom, invented by Ronald McDonald as a substitute to mayonnaise and a way of hypnotising small children. At Reeve's orders, he was stopped by a group of forest-dwelling clowns in the Early 1990s and arrested for plagiarism. Ronald is now on a mine in Guam with his girlfriend Krusty the Clown and lovechild Grandpa Simpson.

In a recent turn of events, Persil, Dazz, Aerial and Calgon made a scheme to kidnap Barry Scott and "bleach" the formula out of him. Things went horribly wrong after they accidentally bagged Michael Jackson instead and these companies were never seen again. It is thought that this is what really made Jackson turn white.

It has been said that the secret formula contains Gene Simmons' tears, William Shatner's charm, Kermit the Frog's angst and Mr.T's pity.