The Late Christopher Reeve seen here in his last acting role as Doctor Who.

For those without comedic tastes, the so-called experts at Wikipedia think they have an article about Christopher Reeve.

Christopher Reeve (Born September 25, 1952) is a former actor, and certified as the laziest man on earth. After his death, he was so lazy that he wouldn't even lift a finger. He's the opposite of Christopher Walken.

Christopher Reeve is a Super Butthole, I'm super serial. Reeve is the physiological embodiment of the interpretation of post-modernism in today's phallo-centric society. As such, reeve has overly capable usage of his belly button. His superpowers come directly from his bloodstream, imbued with the strength of one thousand Liberal Caucus meetings.

Reeve has been most important in the media of late, fighting off slanderous allegations on his good nature from the world's most pertinent media resources the interweb. Reeves has been accused of sucking the spinal fluid out of unborn baby foetuses, a slander which he vehemently denies, his main defence being that he does not exist in a literal state (No pun intended) but rather a metaphysical state and thus can't get at the tasty tasty baby goodness.

Reeve lives with his two children, .Com and .Net in his subterranean home in the lower states of Americanised Guam. He was 58 this spring.

Christopher Reeve was disabled, only because he ran Ultrix. Then, at an especially bleak moment, the door flew open and in hurried a squat fellow with a blue scrub hat and a yellow surgical gown and glasses, speaking in a Russian accent." The man announced that he was a proctologist and was going to perform a rectal exam on Reeve. It was Robin Williams, reprising his character from the film Nine Months. Reeve wrote: "For the first time since the accident, I laughed. My old friend had helped me know that somehow I was going to be okay."

Christopher joined the Fearsome Five after Richard Donner wanted to get into comics by bringing the actors in. He was a total Dick to all the other members and had sexual relationships with Luigi. When the Fearsome Five got their ass kicked by the real superman. Christopher Reeve was turned into a fucking Vegetable. Christopher Reeve is now bat fuck insane after an incident with the JLA. He thinks he is actually Superman which is stupid since he is the Doctor.

Christopher Reeve's evil plan to absorb baby juice with stem cell research to give him super-powers worked. Except, since he was bat fuck insane it turned him into a freak in a Superman costume even though he's in a wheelchair. He killed all the super-heroes with the power of stem cells, but Gene HAckman used the Saviour to turn Christopher reeve into stone. The DC Universe is now ruled by Gene Hackman using stem cell powers he stole from Bart Simpson. Christopher Reeve now walks the Earth in a wheelchair with no ability to walk tallk or fuck. 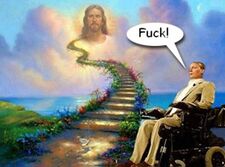 When Reeve died on 23rd Octember 2004, he made a request that at his funeral the guests should perform a re-enactment of the role that made him so famous all those years ago, "The Superman". Led by his children .Com and .Net and his widow, Jim, seventeen guests gamely pulled the catapult back and his remains become one with the wind. Luckily he was cremated else it could have gotten a little messy. Margot Kidder was there but thought it was rubbish. Maybe it was, but for his children and widow this final act more or less epitomised his indomitable spirit, which lives on to this day. In fact, Christopher would often ride around the back yard in a blue skin-tight lycra top shouting "forwards, forwards and away" to nobody in particular, drooling onto his top and shouting curses towards his arch-enemy Stephen Hawking. Thousands of online twats then decided to mail a bloke called Maddox about his Christopher Reeve article, which had contended that Reeve was an 'asshole'. The twats were pissed off because they found it disrespectful. Only then did they realise that the article was written when Reeve was still alive, whereupon they promptly dropped dead from the sheer force of the fact hitting them in the face.

Great to see you!

Christopher is probably best remembered for the invention of Cillit Bang, a formula that has gone on to become the best selling soft drink in the western world, unfortunately it was a total flop in Africa when accusations that is was designed for use by Michael Jackson as skin bleaching therapy got out of control. The truth is, Reeve discovered Cillit Bang while experimenting on his children in search for a cure for spinal cord injuries, which he didn't find before his death. He sold the patent for his new drink to the Prince of Wales.

Christopher Reeve was also a renowned tapdancing champion, garnering much fame in his illustrious career. Most noted for his superb rendition of "Baby get on my train" in Madison Square Garden on March 5 1977. After performing, Reeve vowed never to perform the piece again, despite it's immeasurable appeal. There is only one existing set of footage of the performance, making his decision all the more embittering.