For those without comedic tastes, the so-called experts at Wikipedia have an article about Brian Tamaki.

You’ve all seen the billboards, the television programs, the DVD’s, website, interactive computer game, designer condoms and autographed cannabis pipes – not to mention the exclusive line of Fitness Videos – but how did the most Reverend Pastor Grand Inquisitor Father Superior Jedi Master Leader of Homosexual Reform and First Maori Pope His Excellency Bishop Brian Tamaki start out his award-winning[1] ministry?

Part 1: A Star is Manufactured[edit]

It all started one day back in those decadent and debauched days known simply as “the eighties.” Back then our most esteemed Bishop was known simply as Brian Tamaki. Brian and his ever faithful wife Hannah were living in Rotorua and were just a couple of plain, average salt of the earth working class New Zealanders with modest aspirations of dominating the homosexual adult video industry.

When she returned she found her husband with a look of divine serenity on his face. “Hannah,” he said “To Hell with the homosexual porno business, let's go into religion – there’s more money in it. The overheads are practically nil and it doesn’t require any work or particular skill set.” So it was that Brian added the prefix “Pastor” to his name and entered the ministry. Apart from the obligatory swindling of a nice but gullible elderly couple to finance his first church building, the affixing of the word “Pastor” to his name was the only prerequisite for becoming a minister in the 21st century.

That and the development of his theology, a radical and innovative doctrinal system that dispensed with annoyances like humility and love for fellow man and replaced them with the more progressive and modern virtues of materialist greed and unbridled judgmental bigotry. They kept their doctrines nice and flexible so they could make them up as they went along. The only thing set in stone was that the congregation had to give them plenty of money.

All he needed now was a name for his fledgling mission. That night, while he was drinking Steinlager, fantasising about being fckd up the a** and smoking methamphetamine, in a flash of inspiration Pastor Tamaki hit upon the name “Destiny Church” – after all he explained to Hannah – “once they enter our Church they ain’t going nowhere else in their lives.”

The only thing that was left to do was to file for bankruptcy to escape the debts of their failed homosexual pornography venture, affix the legend “Incorporated Trademark” to the churches name and buy a Harley Davidson to prove how thoroughly modern and downright fucking cool they were.

One thing was lacking though – they needed a catchy slogan. Some other wanker had already stolen and trademarked his first choice “The Choice of a new Generation”, so was “Always a great time for the great taste” which he thought appropriate on account of his high sperm count. Finally he came up with the slogan – “The Breakthrough Generation” - a subtle allusion to his desire to use recreational drugs to "break on through to the other side" under the influence of the ghost of Jim Morrison.

It was the beginning of the greatest Christian mission effort since The Spanish Inquisition. The Tamakis were on their way.

Part 2: One Week ago I couldn’t even spell Pastor – Now I are one![edit] 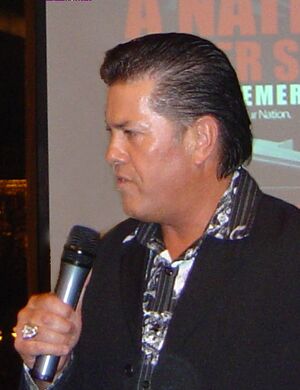 Would you trust your chile to this smarmy looking fucktard?

At first Brian Tamaki thought that the fact he was Maori was going to prove a hindrance to his mission – after all he reasoned to himself, it was all those white folks that had all the filthy lucre. But following a conversation with his spiritual mentor, American television evangelist Pastor Cashflow Dollar, he realized that even this could be turned to his advantage if he patterned himself after such indigenous movements as Te Kooti’s Ringatu.

“Upraised hand, my ass,” he thought. “I’ll show them the upraised finger of Christ and that will soon settle their hash. Throw in a couple of hakas and a few other Maori words and I’ll have them following me like the pied piper, not to mention all those pakeha Christ punchers that like to have a couple of token Maori acquaintances to talk about when they’re on talkback radio.”

And yea, it came to pass that Pastor Brian’s church grew. Faster than a talkback radio host can say “I’ve got a friend whose a Maori and they say the status quo is perfectly fine” the Tamakis were ridiculously rich. The institution of the 10% tithe (on the gross, always the gross, never the net, not under any circumstances) had proven to be a raging fiscal success.

“They just keep on giving me money,” he enthusiastically explained to Hannah that night, “It’s like they don’t even care!” he said while Hannah massaged him with oils specially imported from Saudi Arabia and he writhed sensuously on a bed stuffed with $100 bills from that nights special offering over and above the regular tithe.

“You see church,” he had explained during that nights sermon entitled ‘Rip God off and he’ll rip your heathen balls off’, “the 10% on the gross, never the net, not under any circumstances, always the gross, well that’s just God’s basic entitlement. What you give over and above that is your gift to me, I mean Him, our Lord Jay-sus-ahh!”

He reiterated this point week after week, such a skilled orator was Pastor Brian - it was positively ingenious the way he could turn any sermon on any subject around to the subject of money, and how God needed more of it. No matter what the theme of his sermon, whether it was “Socialism is the Tool of Evil”, “Homosexuals and Women with IQ’s higher than 50 will burn in hell”, “Thinking is the enemy of righteousness” or “Fundamentalist Indoctrination is the true path to Holiness” – all would eventually find their utmost expression in the familiar mantra – “It’s time to take up the tithe and offering now” – at which point the Armourguard security van would back up to the door of the church and the security guards would cock their weapons.

Although Bishop Brian and his charming and shy wife appear in public regularly together, there are more and more persistent rumours that the Bish now has a thing for fellow brown bovver boy - Titio Phillp in a Field. Their intense devition to each other has been said to spark the need for the Brian and Hannah to appear in public on cruise ships around the world, to show the strength of their marriage, but several insiders report that Field is now Brian's best bum boy, and this is not a sin - simply a traditional form of Maori male bonding.

Part 3: Captain Brian and the Destineers[edit]

Not content with the 20 pieces of his father Sauron, and the 7 of his other father Voldemort, Bishop Brian decided to split his soul into over 700 pieces, distributing them as rings among his disciples, otherwise known as "Destineers." Each ring represents one of the 5 Biblical elements of Earth, Fire, Wind, Water and Heart. The rings were reportedly activated at a secret ceremony, using the following incantation:

Bishop Brian has been criticised by the Liberal Media for his overt copyright violations. Furthermore, the 140 Destineers who were saddled with a "Heart" ring have reportedly left the Church in disgust.