From Uncyclopedia, the content-free encyclopedia
Jump to navigation Jump to search
Hitler the Red-Nosed Reindeer
left

Hitler the Red-Nosed Reindeer was Adolf Hitler's half-brother. A gene mutation gave him a dark red nose and other unique features. Consequently, despite the similar given names, there was never difficulty telling them apart, although his brother grew a toothbrush mustache, just to make sure for shit.

Though abnormal, the nose made Hitler look more elegant when marching and it was still dark beautifully in the house, attracting women. Hitler the Red-Nosed Reindeer has been known for trespassing, backyard-grazing and eating out people's gardens and bushes. The police hunted him but it was a guerrilla war and Hitler hardly appears simian. Hitler's tactics, such as Surprise Buttings and Butt Kicks, prolonged this hunt for 17 months, until Hitler was nearly frozen to death while taking a bath. Hitler was caught, sentenced for his several offenses, and released into the depths of Sumeria.

In Sumeria, Hitler adapted to the life of the Sumerians. He settled in the city of Sumer to a harsh life, eating only when necessary, on the brink of death. Hitler tried to get a job and finally became a lantern at the Street of Elmo district, warning cars when they neared a corner. He eventually quit and became a salesman of Christmas decorations. 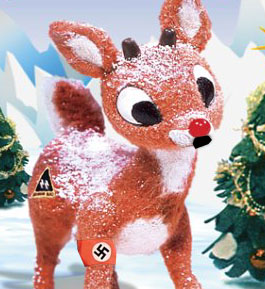 The Sumerian government took due notice of Hitler's capacity for self-defense, and installed him in the Navy during the Great War. He fought in the Gunboat battles against Hittia. Although his formal title was Forward Beacon, he also showed skill at gunnery. He received the Sumerian medal of honor for shooting down the Flying Desert Tiger with nothing but a Panzerfaust. For schizophrenia and showboating, he received the Red Circle.

Fatefully, Hitler wandered into the wilderness after the war. He came to the Limpopo River where a snake lived. The angry Hitler asked the snake what it ate. The snake said "come closer so you can hear what I say." So Hitler went nearer, but too near and was thus eaten alive by the great python. The python was in fact, Churchil, the PM of Christmas, although he loved Jews. Enough of that.

Hitler, the Red-Nosed Reindeer
Had some very angry views
And if you ever heard him,
You would know he hates the Jews

Everyone that was Japanese
Used to laugh and call him names.
They never let poor Hitler
Play in any Japanese games.


Then one foggy Hanukkah,
Satan came to say:
"Hitler with your nose so bright,
Won't you kill some Jews tonight?"


Then all the racists loved him
As they shouted out with glee,
"Hitler, the Red-Nosed Reindeer,
You'll go down in World War Three!"