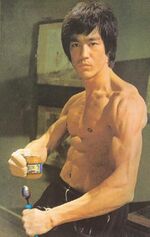 Bruce Lee once asked his opponent, "What does it feel like to be Baby Fu-ed?".

Baby Fu is the ancient and mystical art of feeding one's toddler. It blends common vegetables with Kung Fu to provide one's child with a graceful (not to mention practical) culinary experience.

Baby Fu was created by Shaolin Buddhist Monks that needed to feed the Chinese peasantry out of altruism. It was later adopted by Manchurian warlords as a way to pacify the nation's children. Later, after WWI, Baby Fu made its way to America, where it was taught by Chinese Seafood masters looking for a way to attract customers (by feeding America's children in a new and exciting way), while waiting to get back to work on the railroad all the livelong day. Finally, Baby Fu has reached Today's iteration, which is barely better than the corrupted version in Hong Kong fast food action flicks.

There are many schools (or "flavors," if you will) of Baby Fu practiced by Baby Fu masters. The schools are named for the Kung Fu style and preferred food. While the food-style combination can be changed, purists insist on dishing out the "proper" course.

Tiger Rice combines Tiger-style Kung Fu with rice, a healthy ingredient beloved by all good little children. This is the simplest and most effective school, employing brute force to break the baby's will. This is the style currently dominant in China as well as much of the surrounding area, particularly South of China-proper.

Monkey Pea is a brand of Baby Fu that blends peas, a favorite of parents who care more about their child's health than their development of good taste, and Monkey-style Kung Fu. A regional style that grew out of the Hong Kong Area, monkey pea was brought to a wider Chinese audience by Ziyi Zhang in the movie, "Crouching Monkey, Hidden Pea Pea." It is the most playful style, employing the famous moves, "Here comes the aeroplane!" and "Won't you let the people in the tunnel?"

Dragon Dung was a taboo Baby Fu, banned in mainland China. This forbidden art feeds the child high-quality strained poop using Dragon-style Kung Fu. It would likely have been lost entirely if it wasn't for Bruce Lee, who brought this strange and mystic style of baby-feeding to the United States, who accepted it as a true and authentic representation of how the Chinese fed their children, as they didn't know any better. The current most famous practitioner of Dragon Dung is Bruce's son, Jet Li. This form of Baby Fu relies heavily on deception, telling the child fables to successfully feed them. 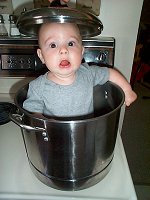 Sometimes it is necessary to teach the baby to become one with the food.

Drunken Baby is a form of Baby Fu popularized by Jackie Chan. It is by far the simplest form of Baby Fu for amateurs to practice, as the name itself is self-explanitory.

The Praying Peaches school of Baby Fu feeds the baby yummy Peaches using the praying mantis style of Kung Fu. This is the fastest-growing school of Baby Fu in America, Today. It mixes elements of popularized American-style Dragon Dung Baby Fu and authentic Asian Baby Fu with a heavy reliance of forms (such as Tiger Rice) to successfully penetrate the child's defenses.

Finally, Carrot Crane is a somewhat of a "show" form of Baby Fu that feeds the child Carrots using the famous Crane-style Kung Fu. This difficult style has been demonstrated by Ralph Machio in the movie "Karate Kid," (though technically Karate is the Japanese form of martial art, some creative license was used, as the Japanese don't attack their children while feeding them -- that comes later). This style of Baby Fu is the most graceful, relying on agility and tactics to defeat the child and lovingly nourish them.

There are many weapons you can employ when attempting to feed your child using martial arts. Different tools can be used for people of varying skills and can depend on the technique you are using. Ask your seafoo before attempting to use any of these methods to feed your child, and remember that right tool could very well be the key to victory.

The "weapon" known as the art of karate in Japan, one may opt to forgo the use of any weapons 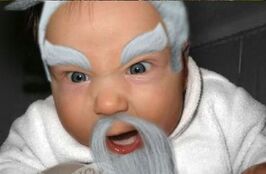 and go after the child bare handed. While an effective means of feeding, this takes a bit more practice than the other weapons as things could get a little messy. One is encouraged to bring a napkin/moist towelette if employing this weapon.

The spoon is the most basic of weapons and should be used by those who are just starting out. It consists of an elongated round bowl attached to the end of a slender handle. The spoon is particularly popular for use in the Monkey Pea School. According to its greatest practitioner, Townsend Coleman, "spoon" also makes for an excellent battle cry.

The fork is a fairly recent addition as a implement in the art of Baby Fu. This stems from the fact that its use was controversial for many years. The English were especially known for ridiculing the fork as a completely unnecessary utensil. "Why should a person feed with a fork when God had given him hands?" In time many began to discover its usefulness in transporting more "solid" foods, and eventually the fork was also embraced as a viable weapon.

A hybrid utensil devised by the Mad Ronin S. W. Francis in 1874 for his unconventional School of Anything-Goes Baby Fu. This mad creation of his twisted mind was an attempt to gain a superior edge over competing Baby Fu schools by merging the advantages of the spoon with those of the fork. This advantage proved elusive as he could never settle on which food his ingenious weapon was best suited for. So, he began roaming the countryside in his search for the perfect food, along with his faithful minstral who would record his exploits in an epic haiku.

A picture from a recent ad campaign reminding parents to find a Dragon Dung master to feed your child poop.

Knives!?! What are you thinking!?! We're talking about feeding babies, you sicko!

Chopsticks were introduced into Baby Fu about 5,000 years ago in China. Records are sketchy, but it is likely that the practice started when people began breaking twigs off trees to retrieve and feed small pieces of food to wailing toddlers. A very ancient and honorable weapon, chopsticks are the highest weapon in the art of Baby Fu. They can take up to 30 years to master. But when handled properly, they make one almost invincible, even against the most ornery of children.

While this may seem like a highly dangerous method of Baby Fu, it can be used to deliver foods to the child at a safe distance, and with considerable force. Developed in Thailand when masters of Baby Fu made attempts to spread their practice across the globe, and favored by more deviant pupils of the Tiger Rice style, as well as particularly extravagant Monkey Pea masters. The method of delivery is to put the food on the end of a kebab (be sure not to leave the point exposed, as it could be fatal) and fire it from a bow. Since the food should weigh about the same as the flammable material on the tip of an incendiary arrow, you should attempt to fire as such. Since the baby may flinch and deflect the kebab, restraining them with a high-chair or placating them with a quick nap may be in order.

Baby Fu should not be attempted by an untrained practitioner, as this will lead to a horrible mess with the child giggling up a storm and the parent contemplating child abuse. If you absolutely must feed your own child, consider taking a special training course in basic feeding techniques at your nearest training hall. And remember, if there's one for daddy, one on the floor, one for the doggy, and finally ONE FOR THE BABY, you've won.