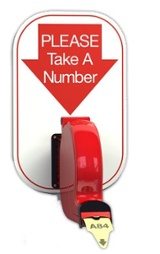 Take a ticket. Any ticket. Your turn will come soon.

Anybody here? Hello? Echo...echo...echo...echo... That's strange, nobody seems to be here right now. I remember when this place was bustling with activity. Ok, there's some new graffiti on that wall, and some new trash on the floor, so somebody was here awhile ago, but I guess they finally got bored and left or got kicked out by the security guard. Where is Everybody?

The front desk seems to be empty right now too. Maybe I should ring the bell. (Ding.) Oh, I see, there is a ticket machine on the wall with numbered tickets. (Takes one.) Ok, I'll wait a few minutes and sit in these worn-out chairs. Speaking of worn-out, all the magazines are from 2017, and the articles are dog-earred with pages torn out. At least somebody left an empty pad of paper here. As a matter of fact, there is a whole stack of pads of paper at the front desk. It is odd that nobody has touched them or even drawn or written on them, considering how much writing has been done in marker on the magazines on the table.

On the front of the front desk is a sign that advises that the office has free guest wi-fi available. Odd that nobody is here to take advantage of it. Oh wait, no wonder. "Ask at the front desk for wi-fi password". I suppose everyone just uses their cell phone instead nowadays anyway, so nobody really needs wi-fi anymore.

At least they seem to have a television here. (Checks behind the front desk). Yes, there's a remote for the television here. (Turns on television). Looks like the television is tuned to the news channel. They are playing a story about the increasing number of homeless and destitute people. How depressing. (Changes channel) What's this? Another news channel? And they are running a story about how the rich cannot make enough money. Enough money for what? Another yacht? Another casino built on the backs of unpaid contractors? Another Rolls Royce? Argh, I better change the channel before I get angrier about the topic. (Click) No way, another news channel? This time they are running a story on how immigrants are invading our country and committing crimes. Bah, most immigrants are less criminal than gang members born here are, and many legal immigrants I know came here to start businesses. Grrrr...racism. (Changes channel.) Oh, a speech by the President! He is promising that if he gets his wall, he will allow certain concessions, but it sounds like he is NOT promising to end the shutdown. Maybe I better change the channel again before I get too worried about that. (Changes channel.) Celebrity news! Oh bother, another celebrity couple are getting divorced, and yet another celebrity couple are getting married. I could care less, so I change the channel. (Click)

FINALLY something other than news. The Twilight Zone is playing. Too bad it is an episode I have already seen. (Click.) Ok, it is the Food Channel, with bakers trying to make the fanciest cake possible. I'll never make a cake like that, and watching that kind of thing just makes me hungry. (Click.) Oh, a wilderness show where the goal is to survive. Thanks, but I'm too worried about my own problems right now to worry about TV people's problems, and it is kind of mean to put people in that situation. (Click.) Sigh, a game show. I really don't want to bother with learning trivia right now. (Click.) A kids cartoon? (Watches for about 5 minutes until a commercial break.) Oh boy, kids shows really have gone downhill these days. The quality just isn't what it used to be. (Click.) Oh, it's the Animal channel. They are showing a pack of lions in the wild. Too bad I'll never go on safari in Africa. (Turns off the television.)

Where are the Newspapers? 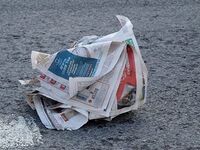 Oh well, maybe I'll read the newspaper. At least that should be current. Wait a minute, there are no newspapers here! Oh yeah, the last major newspaper in the area closed last year from lack of subscriptions. What a shame, they used to have not only national news headlines, but classified ads, and local stories, though you had to flip a few pages back for them. Not only that, but they had comics! I was really hoping to find some comics to read about now. But I guess the only comics we will find now are online.

I was really hoping I wouldn't have to do this

(Gets out cellphone.) I really didn't want to use up any of my minutes on my cell phone plan, so I didn't want to have to pull out my cell phone. But it has been fifteen minutes, and nobody has turned up yet. (Makes a call to management.) (Pushes 1,3,2,5,7,9, then 3.) What do you mean I have to start over? I hate these phone menus! (Dials again.) (Pushes 1,3,2,5,7,8, then 2.) Oh no, they put me on hold. Guess I'll be here awhile longer. Still nobody in this room though. I really hope somebody comes soon.