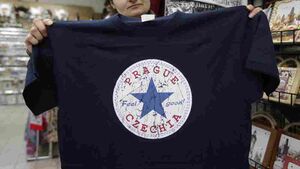 A man displays the new logo that citizens of "Czechia" will bear on their Czuch Taylor tennis shoes.

PRAGUE, Wherever -- The Czech Republic's president, prime minister, defense minister, public relations firm, and T-shirt vendors have all approved a change in the country's name, to "Czechia."

The new name is shorter and experts at the BBC say it will fit better on a soccer jersey, and will give sports color commentators a few more seconds per broadcast to try to say important things instead. Importantly, it also officially distances the country from a republican form of government. The country could decide to revert to a Czech Dictatorship or a Czech Personality Cult without the need for further renaming.

"Czechia" was formed two decades ago from the break-up of Czechoslovakia. However, there was a bitter custody fight, and ex-spouse Slovakia got the flatware, most of the visitation rights, and the exclusive right to have a noun form for the nation. The "better half" was relegated to being the Czech Something-or-Other. 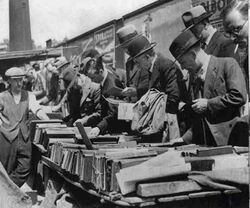 Masters of the Internet search for pages that will require renaming. Happily, they have not yet reached Uncyclopedia, where there are recent new obstacles to page-moving.

Proposals for a single-word name have been around ever since. However, "Czechia" does not support universal approval. Detractors worry that Russia might mistake it for Chechnya and the newly named country would find itself inside a raging battle without even a misspelled declaration of war.

The Go Czechia website declares that "The Dominican Republic and the Central African Republic are the only two countries in the entire world that do not have short names." The so-called "United States of America" has no such problems. Although Latinos stubbornly refuse to admit that it is America and they are not, they breezily refer to U.S. residents as estadounidenses (Unitedstatesians), even in the United Mexican States, and the country itself is called simply Gringolandia. Likewise the "United Kingdom of Great Britain and Northern Ireland Pending the Next Tumultuous Secession Vote," which is about to adopt the simpler name Europe.

Czechia's budgeteers noted that Internet punsters will race to devise a motto for the new country, at Gringolandia taxpayers' expense rather than their own. Czechians can use a foreign motto such as "Czechia, Please!" or a traditional one such as "Kde domov můj?" as the renaming gives new relevance to the Czech national anthem's query, "Where the Hell am I?"