UnNews:Crocodiles self-deport before swamp is drained 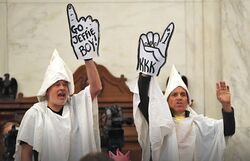 Two "homies" of Senator Sessions drove up from Alabama to root for his confirmation as Attorney General.

WASHINGTON, D.C. -- Several groups are jumping the gun at Donald Trump's vow to "drain the swamp" by pulling the plug themselves.

The Service Employees Union last month announced a 10% job cut in January, and a total of 30% through 2017, which it attributed to Trump's victory. "Because the far right will control the government, we face threats to the ability of working people to join unions," wrote President Mary Kay — a threat best resolved by ceasing to ask them to. She wrote that the SEIU must "dramatically rethink" its strategy, perhaps not as dramatically as attending Senate hearings in Ku Klux Klan hoods, but pretty dramatically.

The organization's $300 million budget went to support the Democratic Party, Hillary Clinton, and the "Fight for $15" to increase the minimum wage, of obvious benefit to workers whose labor is not worth $15, except for the hellacious daily commute to Chihuahua, Mexico they would now face, except that the union went oh-for-three. Given Trump's changed priorities, spokeswoman Sahar Wali called for the union to "realign our resources and streamline our investments." She said it might be re-purposed as a restaurant chain specializing in sausages and brisket, and perhaps renamed Wali World.

An organizer at the Clinton Global Initiative learns about the reduction-in-force.

The Clinton Family Foundation and Tip Jar is laying off 22 staffers, according to a New York State Labor Department filing last Tuesday. Some staffers believed it would constitute "bad optics" to lay off staff of the Clinton Global Initiative, while others said it would be even worse optics not to do so.

The fund said the layoffs were to "deal with the negative spotlight" put on the fund's activities, and not to deal with what the fund was doing that drew the spotlight in the first place. The fund claimed the layoffs were announced last September, before Clinton was trounced by Trump. This means the layoffs were based on Clinton's promise to finally end years of pay-for-play if she were elected President, rather than on donors' sudden realization that there would be no "play" for which to "pay."

The fund raised the hope that those fired might find work elsewhere within it, which if it were true would mean there was no need to notify the Labor Department at all. However, as one Washington source said the plan was for "heads to roll," their new positions would need to be compatible. Failing to read memos and failing to hear instructions would be two ideal jobs for headless aides, who could also fail to "smell the coffee." The move would mark Clinton's first use of the guillotine, which would make it problematic to lay out the former employees under trees in a public park and make it look like suicides.