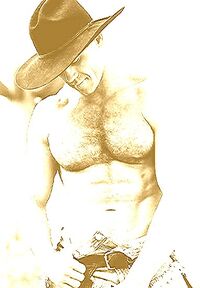 LOS ANGELES, California -- Rex Longhorn, world-famous country star, has just released a new song detailing the difficulties involved in being a world-famous country music star. The new record, an acoustic guitar driven number, is a plaintive examination of the depression surrounding Country Western musicians, long thought to be very cheerful fellows who enjoyed wearing tight jeans, "wrasslin" with horses, and "roping steers" under the vast expanses of the Texas sky. But Rex says that this is just an image most of his cohorts put on for the camera. Behind the Wrangler Jeans and Ford F-150s, tricked out with bedliners and mud tires, there's a hole that most country artists try to fill with alcohol and loose women.

In responses to this emotional shallow, many country artists are writing songs about their depressing past-loves and their current problems. Following with this recent trend, Rex is releasing a new song entitled "My Heart is Broken and I'm Drunk." About his new single he says: "For so long we've had to keep our deepest feelings hidden, as country musicians. There's a stigma attached to people who write about things that depress them, in the "scene". You may not notice it, but it's there. It's there." Rex says of his new song "People think being a rich country music singer means you don't have any problems, but that's just not true. Just this last week I've had 3 wives divorce me, my truck has broken down a half dozen times, my dog has died, and my heart broke, literally broke, on two separate occasions. If it wasn't for the aid of some of the best medical teams in the world, I would have died. That's the simple truth. That's real."

Record executives are leery of the new trend in country music, though. Says Capital Records A&R Lucius "Slick" DaBonaire, "I don't think there's a market for idiot-poetry, among the music buyers these days." Many are complaining that all these new country records are very similar to one another, almost interchangeable in their anonymous psuedo-depression, but Rex says this "total bullshit." Continuing he said "I'm an artist, I've got to let this stuff out, and if anyone has a problem with that, fuck them and the horse they rode in on."