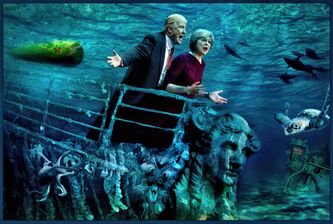 Theresa May leaves the future behind as did her friend Donald

Downing Street 10, London -- Yesterday Theresa May undersigned the necessary letter to apply for Britain's release from the European Union.

The day after: Suddenly the police guardian who's bearing responsibility for the prime minister's quiet sleep began to whistle an ancient 20th-century melody of Paul McCartney. Our UnNews-stringer who eyewitnessed the scene in the morning today pricked his ears, becoming aware of voices chanting that song: Yesterday, all my troubles were so far away. The music from behind Downing Street 10's kitchen window was periodically interrupted by a loud "cheers!" to rise again louder afterwards. Apparently these were the voices of May's cabinet members. They really had a reason to party because their chief had unveiled her schedule for the Brexit. Thus all uncertainties are past now.

And here it is, The Mistress Plan (Boris Johnson kidded The Unmisterious Plan) in the words of a précis given by prime minister Theresa May, pointing out anticipated open questions concerning independent Britain's political concept to make Brexit the success she has promised:

The cabinet's breakfast session in May's kitchen was finished by all together, singing another song, the Official National Anthem for the two years of Brexitation.

Meanwhile the letter reached the President of the European Council, the Pole Donald Tusk, who used it to wipe away the tears he shed for having been elected into his office by all EU countries except Poland.