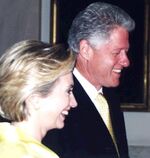 WASHINGTON, D. C. - Speaking, as she often does, on behalf of her philandering husband, former President Bill Clinton, Senator Hillary Clinton denied rumors that he ever had sex with pop star Michael Jackson.

In a recent interview at an undisclosed location, Jackson admitted to having undergone sex-change surgery in an effort to have children of his own, first by artificial insemination and then with the help of the late godfather of soul, James Brown [1]. During the same interview, Jackson refused to answer questions about his alleged sexual affair with Clinton, sparking additional controversies.

Barbara Walters, once a respected journalist of sorts and now the producer and hostess of The View television talk show featuring Rosie O’Donnell’s lesbian antics and bigotry, uncovered the allegations while she was interviewing fellow talk show hostess Larry King.

Jackson during press conference at which he alleged affair with Clinton

According to King, Walters declared, “Michael Jackson definitely had an affair of a sexual sort with then-president Bill Clinton. They exchanged mouth-to-penis kisses in the Oval Office, Jackson supplying the mouth and Clinton the penis.”

“Bill was lonely,” King told Walters, “and Michael was trying to conceive a child for purposes imaginable only to him.”

Walters asked King how Jackson expected to become pregnant through an act of oral sex, but King declined to answer. However, world-renown sexologist Dr. Laura Schlessinger, who also hostesses a talk show, hers on radio, said, “If semen is dribbled into the right place, impregnation is a possibility.” Allegedly, she used a similar technique in impregnating herself with her firstborn child.

Jackson said that he has never heard of “oral sex” and, as a virgin practitioner of abstinence, wouldn’t practice such a practice, even if he did know what it is and how to perform the “dirty deed.”

Clinton: "I did NOT have sex with that 'woman,' Michael Jackson!"

“Why does everyone think everything has to be about sex?” the singer crooned. “Can’t some things be about love and music and cute, naked little boys?”

“Bill assured me that he has not had sex with that woman, Michael Jackson,” Sen. Clinton insisted, declaring that “since his word is his bond, that’s good enough for me.”