UnNews:City of Toulon not liable in rhino crushing mishap 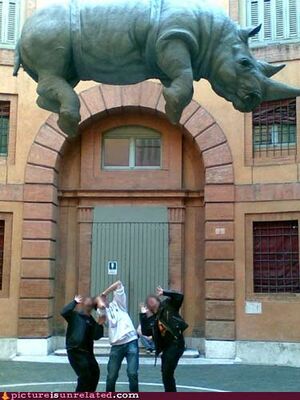 Death by rhino ruled Act of God by the citys insurer, AIG.

TOULON, France -- Authorities in the city of Toulon announced today that the local government will not be held responsible for an accident last week, in which three tourists were killed by a falling rhinoceros. Matthew Gallager, Mitchell Grossman, and Pyotr Russell, all from Wilmington, Massachusetts, were in France on holiday when the fatal incident took place.

Infamous insurer AIG will not be paying on the citys insurance policy in this case because, "a rhinoceros, appearing out of thin air, and falling on three people, is certainly an Act of God, and therefore, uncovered by our policies." Company spokesperson Aaron Carpfondle continued his statement, saying, "Only in France could this happen. You never hear about things materializing and killing people anywhere else. I think God's got it out for the French."

A team of government-appointed physicists is now investigating just how a rhinoceros appeared out of nowhere, about 30 meters above the ground. The Swiss CERN staff, represented by Dr. Max Edelscheiss, is investigating the possibility that the last test run at Large Hadron Collider produced the phenomenon as a side-effect.

Former French Minister of Science, Hubert Curien, told UnNews today that, "there could have been a black hole generated during testing, and who knows what could fall out of a black hole? Or it could be dark energy or something... I don't know. Anyway, we're looking into it."