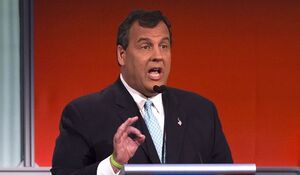 Christie's advisers insist that Republicans cannot win without the Latino vote, and knowing nothing about Latinos, this requires a gimmick to win over Mexican lawbreakers.

LACONIA, New Hampshire -- New Jersey governor Chris Christie (R-NJ) has offered his first foreign-policy idea as a Presidential contender: that a bar-coded sticker be attached to the forehead of every illegal immigrant.

“At any moment, FedEx can tell you where that package is. It’s on the truck. It’s at the station. It’s on the airplane,” the candidate said. “Yet those three fully-loaded pizzas I ordered half an hour ago — Yianni's has already lost them. Likewise the two calzones, and the garlic bread. But anyway, we need to have a system that tracks all the golden-brown packages from the moment they come in, and then taps them on the shoulder and says, ‘Time to go.’”

In 2012, nominee Mitt Romney resisted calls for the forced deportation of 10 to 30 million illegals. Political consultants told him it would be almost as costly as doing nothing, and Mr. Romney offered the middle ground that, with sufficient stern looks and seriousness, the illegals would spontaneously "self-deport" and leave to Americans the jobs that George W. Bush had famously declared they were unwilling to do.

Mr. Christie thus has called for Federal Express CEO Fred Smith to set Immigration and Customs Enforcement up with some of the same FedEx technology to track illegals. A laser-printed bar code would be affixed to the forehead of every Mexican border-jumper. This would let any federal official with a compatible wand scan the individual and determine whether it is time for him to wade back to the other side of the Río Grande. Mexicans could be tracked to ensure that everyone standing around in the Home Depot parking lot arrives at some nearby construction site. 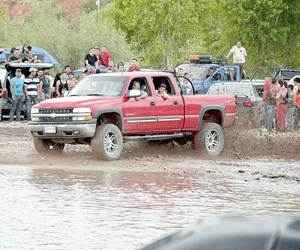 The next batch of pregnant Mexicans prepare to cross the Rio Grande to make "package deliveries" under the Fourteenth Amendment awarding instant American citizenship.

The proposal was not aimed at putting Social Security on a more sound footing, or keeping illegals from filing fraudulent claims, as Mr. Christie's announced solution for that program is to use "means-testing" to freeze out Americans who have played by the rules for 30 years.

Mr. Christie's Republican competitors were scrambling to out-do the proposal. Former Hewlett-Packard boss Carly Fiorina proposed that I.C.E. save money by opening a call center in Pakistan. Governor Scott Walker said that bottled water in the Arizona desert should be replaced by cartons of Wisconsin dairy products (in mini-fridges) on the Mexican side, with almond milk for the lactose-intolerant.

On the other hand, Donald Trump simply repeated his call to fence the entire Mexican border, and Jeb Bush reiterated that Mexican illegals were only displaying their "love for America." He said we should prepare paperwork for those who believe they are Americans, just like gays who believe they are married. Those who also believe they are smart should get college degrees, likewise printed in Spanish. Marco Rubio, another candidate working both sides of the río, again touted eVerify, the concept that a government that cannot run a health care website issue work permits nationwide. He said that any crackdown on the innocent is sure to snare a few of the guilty, and when they can't get a job, they can fall back on Permanent Disability.

Republican CNBC analyst Larry Kudlow denied that immigration is a problem; though illegals take American jobs and undercut wages and salaries, they also bid up consumer prices, which helps profits, indirectly induces the payment of taxes, and might someday get the Fed to stop mucking with interest rates. "A rising tide of illegals lifts all lifeboats," he said.

Democrats were harder put to respond. Rhode Island's Lincoln Chafee insisted that the nation convert to metric, such as to list the heights and weights of migrants on their Mexican matricula consular. Bernie Sanders said there was no need to take action against the illegals at all, as they are joining the fight against the One Percent who are "making out like banditos in America." Hillary Clinton said something in a sudden, thick Mexican accent. Joe Biden said something in his ordinary manner of speaking, so no one understood it either.