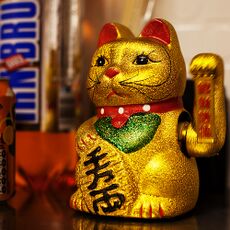 The lucky cat waves his left arm upon the shores of the UK, and they have many many plans to spend it wisely.

LONDON, England -- The red carpet has been rolled out for China this week, as Her Majesty the Queen formally welcomed Prime minister Xi Jinping and his wife to the UK with an official state banquet at Buckingham Palace. The Chinese PM's “Superstate” visit has bought the UK deals worth 50 billion dollars.

As the horse-drawn carriage arrived at the front of the palace, Her Majesty's corgis were ushered into a van at the rear, and the entourage were given the all-clear to proceed inside, right on schedule.

As some of the delegates busied themselves exploring the palace to assess the value of the building and artifacts in the banquet hall, the Queen's opening speech welcomed the PM and his wife, and said: “it was not before time, as one gave Hong Kong away 18 years ago now.”

President Xi said that he is pleased it was their “friends” the UK that were the first Western country to break and lay forth the begging bowl. He added that China is looking forward to the mutual benefits, as well as competitively priced interest payments.

Chinese PM is formally greeted by the Queen while his team evaluated the equity in her estate.

In honour of the VIPs, the banquet portrayed a traditional Chinese peasants theme. Deep-fried spiders, imported from a street market in Hangzhou, were served as a starter, a favourite of The Duchess of Cambridge. The main course was duck heads, billed as the “taste of the working country”, accompanied with a side-saddle of sea horse on a stick and a wooden cup of baijiu.

Wednesday, the amateur diplomacy commenced, as Xi Jinping and his wife Peng Liyuan met with the Camerons, David and Sam. The British PM gifted the VIPs with a wicker basket of jams and shortbreads and the Chinese PM returned the honour, presenting the couple with an excellent fake Rolex watch and fake Mulburry handbag acquired from Shanghai airport.

As the two premiers discussed late repayment penalties, Sam Cam and Peng chatted about Canada's PM Stephen Harper's tattoo. Peng said Xi underwent the process of Ci Chen (body puncture) to carry the mark of the legendary general Yueh Fei from the South Song Dynasty. Sam Cam said she was going to get that one, but it was forty quid. 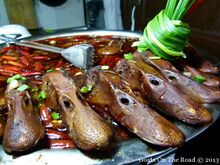 Traditional Chinese peasant-food was the theme of the Palace Banquet, The Chinese President's wife, Peng Liyuan, got to keep the ornate nut-quackers.

Agreements are now in place for bankrolling the Hinkley Point nuclear power-station, some electric buses, some Aston Martins and, most curiously, a Kent-based theme park. Boasting the world's first “Tory Middle class, London commuter belt” theme, the park will include Audi dodgems, land your car keys in the bucket to win a free ride, and The Antiques Roadshow roller coaster.

After a second banquet at the London's Guildhall, where the delegates were served deep-fried scorpion and chicks in batter, China has also agreed not to use cyber-espionage to steal commercial secrets from the UK (anymore), provided the President and his entourage could just have sausage and chips for dinner tonight.