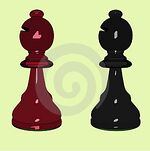 LONDON, England - After a very violent feminist rally outside of the National Chess Piece Makers Association (NCPMA) building occurred last night, London law officials have asked that the chess piece makers make more female chess pieces, to quell the sexism arguments that have arisen over the fact that the only female piece in chess is the queen. Feminists argue that this form of sexism should not be tolerated, and that they demand female rooks, knights, bishops, and Kings. Yes, female Kings. The NCPMA is fully willing to make the female rooks, and knights, but have a big problem with the creation of female bishops.

Following the request from the law officials in London, the NCPMA released a short statement about why they will never make the requested "female-bishops".

London officials believe that the NCPMA does not understand that all the protesters want is female bishop pieces for chess, not actual female bishops. However the NCPMA explained later on that they understand full well what the protesters are asking for, and the same argument still applies, and that their god would never let this happen if he was in charge of the NCPMA. They then proceeded to "pray to god for the souls of the poor damned fools who protest the will of god."

The NCPMA have locked themselves away in their building and have claimed that they will not come out until these outrageous claims have been quelled, and anyone who protests the will of god must be immediately jailed. This has led to some problems, seeing as the London officials have no way to charge the protesters criminally, and thus, they remain on the streets, protesting outside of the NCPMA building.

It is still unknown how this chess-piece makers strike will affect the international sales of chess pieces. Without the chess pieces, the National Chess Board Makers Association will have no pieces to put with the boards, and sales of chess sets are expected to take a massive plummet. This could send chess-board and chess-piece collectors, and enthusiasts all over the world into fits of rage, and chess clubs all over the world will be shut down, thus forcing the chess players to go outside, which could cause overcrowded street corners, and more traffic congestion, forcing the creation of more roads, which will require the use of all of a nation's money, making the nation revert back to its underdeveloped state, and begin building as a new nation from scratch. This strike could be the end of modern civilization as we know it.