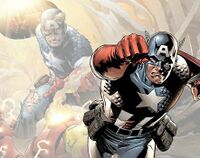 NEW YORK, NY - Known to millions of fans, Captain America was killed by a sniper as he made his way to an arraignment at the federal courthouse in New York City. Also killed in the hail of bullets was Steven (“Steve”) Rogers, who happened to have been in the wrong place at the wrong time.

As a youth, Cap, as he was known to his many homosexual admirers, was a wimp. Weighing only 98 pounds, he earned a living as a model for advertisements promoting Charles Atlas’ bodybuilding regimen, often having sand kicked in his face by much more masculine men while he lounged on the beach with his nerdy freckle-face girlfriend. He longed to live a more robust life as “a real man.”

Too frail to join the army, the navy, the air force, or the Marines, he was about to settle for a nothing job as a coast guardsman when he heard that the army, in an effort to understand the research being conducted by the Nazis’ Dr. Mengele, was conducting clandestibe research, and he agreed to become a human “guinea pig,” allowing military doctors to inject him with a new secret serum known as testosterone.

After being injected with special Meatavitavegamins for a year, Cap received daily radioactive enemas until he began to excrete red, white, and blue faeces, proving his remarkable patriotism and loyalty to the land of the free and the home of the brave. As a result, he grew a pair, and assumed the alias Captain America. Dressing in long underwear and carrying a shield, he tried to pass himself off as a transsexual crime fighter.

Over the years, he developed schizophrenia, calling himself by a variety of grandiose names, including Nomad, The Captain, Yeoman America, The Sentinel of Liberty, The Star-Spangled Avenger, Crossbones, and Pussy Galore. He worked as a busboy, a waiter, an artist, a soldier, a police officer, a freelance illustrator, and a special agent for an anonymous covert government agency known as SHIELD. Despite the fact that he was born and grew up in New York City, he considered himself an American. He was born to deceased parents, Roy and Ginger Rogers.

For several years, Cap had a young male “companion,” whom he called Fucky Barnes. However, Fucky was killed by the villainous Captain Zero, who had a crush on Cap and was jealous and envious of Fucky. Zero froze Cap in the icy waters of the North Atlantic. (This was before global warming started to turn up the heat.)

The Avengers, a New York street gang, thawed Cap’s body out, bringing him back to life, and he joined the toughs.

Other costumed homosexuals expressed grief at the passing of yet another of their ilk. “He was good in bed,” Wolverine said, “a tireless, enthusiastic lover who knew how good it can feel to give.”

Mr. Fantastic, the leader of the Fantastic Four, also expressed dismay at the untimely passing of “my wife’s boyfriend and my concubine.”

President George W. Bush declared an official day of mourning in honor of Captain America, saying, “I will miss his reassuring hugs and warm caresses.”