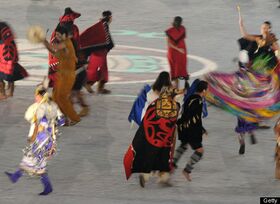 "Why the fuck are they dancing so much," yelled a visibly angry American athlete as he watched Canadians run onto the Olympic field and perform snakelike interpretive movements. "Stop fucking dancing!"

VANCOUVER, Canada - When it was announced that Vancouver would host the 2010 Winter Olympics, the world held it's breath in hopes that the Canadians wouldn't fuck it up. These hopes were shattered last night with what has been described as the most embarrassing opening ceremony to the Olympics ever.

The ceremony started out promising enough with the Parade of Nations.[1] However, it soon became clear that things were about to go terribly wrong. To honor the Aboriginal peoples the Canadians conquered centuries before, several hundred half-naked white men ran onto the field dressed up in war paint and feathers. In a poor impersonation of an Indian, they declared the Olympics, "Open to all white men, China men, all men of all places! Knocka homah!" The impersonators then began dancing around a scantily clad Nelly Furtado[2] as she sang a generic pop song.

Soon followed was a lengthy rain dance, which caused four curiously shaped Indian totems to rise from the ground. The crowd reacted in shock and curiosity. 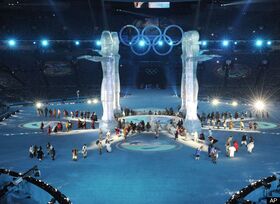 The totem poles seemed to have had Freudian influence.

"Looks like throbbing cocks," claimed an American athlete. "I agree, mate. They're almost as big as an alligators'. Crickey!" said an Australian athlete standing nearby. A Japanese athlete chimed into the conversation with, "Theya soah huuuge!"

To complete the transition from offensive to confusing, next came a history lesson in the form of even more interpretative dancing. This time several Canadians dressed in winter gear strolled around the stadium field while snow confetti fell from the sky. After several minutes of them awkwardly walking about, looking at the sky, looking at the ground, and looking bored in general, something finally happened. Coming out of a sea of artificial smoke, a heavily bearded Canadian with a cane. He looked bored as well.

"That's Canadian Moses," exclaimed a Norwegian athlete. "Nah mon, that's definatlees Canadian Gandoof!", said a Jamaican athlete as he inhaled marijuana smoke. Several more awkward minutes passed as the Canadian Gandalf strolled around the stadium, looked at the ground, and eventually waved to other Canadians. Taking a deep breath, he raised his cane in the air, smashed it on the ground, and yelled, "You shall not pass, eh!" This apparently caused some slight Global Warming, as the ice caps beneath them broke apart.[3] 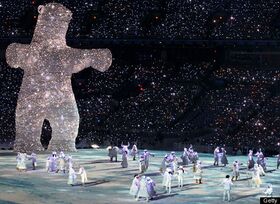 The giant bear was the highlight of the event.

What followed were several "tributes" to different regions of Canada. A crowd of young and racially diverse Canadians cartwheeled onto the field where they then danced around several more phallic shaped poles. This meaningless spectacle was even worsened when it was accompanied with the music of Sarah McLachlan, star of all the pet killing commercials.

Next came a tribute to Quebec in the form of a fiddle-playing Spartan on a floating canoe having an argument with his own shadow. What this had to do with Quebec is unclear. This led to a complete tap-dancing fiddle showdown between hundreds of Canadians.[4]

"And that's the history of Canada!", said the enthusiastic Canadian narrator Kiefer Sutherland as the marathon of interpretative dancing finally ceased. The confusion among the audience reached it's maximum capacity.

Following Kiefer was a bearded, overweight beatnik, introduced as a YouTube celebrity, causing many to mistakenly think he was Numa Numa guy. He preceded to read a poem about how much he loved Canada, the highlight being when he announced "..from A to Zed, and yes, we say Zed instead of a Zee" to great applause, as this was Canada's proudest achievement. When he didn't swing his arms and start dancing to "Dragostea din tei", millions more changed the channel in disgust.

At this point the ceremony was running in overtime. Immediately, most television stations went to regularly scheduled programming, making it the most anti-climatic Olympic ceremony in history.

Reports came out several hours later that after the media blackout, Wayne Gretzky was tasked with lighting the official Olympic cauldron. Carrying in torch in pride, Gretzky waited patiently for the cauldron to rise out of the floor. Unfortunately, a malfunction took place underground, causing Gretsky to stand there like a dope for several minutes until it was fixed. [5] The cauldron was finally lit in spectacular beauty, yet a second outdoor cauldron several blocks from the stadium also needed to be lit manual so outsiders would be able to see it. As Gretsky held the torch riding in the back of a Toyota, he was furiously pelted by drunken Canadians. Gretzky's whereabouts are still yet unknown. Thus ending the open ceremony to the 21st Winter Olympics. 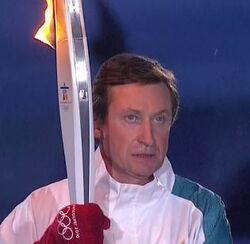 Gretzky was not amused.

Realizing Canada had indeed met the world's expectations, Prime Minister Stephen Harper released his prewritten apology to the rest of the world the following day, promising never to pull this crap again.