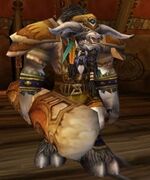 THUNDER BLUFF, Mulgore. GNN (Goanna News Network). TAUREN chieftan Cairne Bloodhoof yesterday released a video message praising the "selfless heroism" of the 9/13 Darkmoon Faire attackers and encouraging all members of his al-Horda network to rise up against "the godless crusaders of the Scarlet Crusade, along with the dwarves and elves who are their stinking dig-rats".

The video message, contained in a little hologram thingy that sprung up from an enchanted pebble a bit like Princess Leia did in her famous 3D "Help me, Obi-Wan Kenobi" vodcast, was Bloodhoof's first public appearance since a bunch of hilariously over-optimistic level-70 allies from the Burning Blade server tried to assassinate him several months ago.

"Those ally 70s got totally pwnt, just like the lowbies who dared set foot on Mulgore on the sacred day of 9/13," Bloodhoof said.

"In the name of Cenarion, I advise all humans, dwarves and elves that if they want to do Darkmoon rep grinding or cash in their silly little trading cards they should do it when the faire is in Elwynn Forest, lest their flesh be stripped from their bones and fed to the plainstriders.

In the infamous 9/13 attacks, more than 3000 humans, elves, dwarves and gnomes who turned up at the Darkmoon Faire in an effort to cash in their soft, bushy tails for mystery packages containing crappy green items were repeatedly pwnt, camped and teabagged by an ad-hoc militia of taurens, trolls, orcs and undead.

In an ill-organised reprisal raid on Thunder Bluff the following week, more than 4000 ally 70s were totally pwnzored by leet NPCs and passing Koreans.

In his video message, Bloodhoof warned Alliance leaders to withdraw their "child soldiers" from Warsong Gulch, Alterac Valley and the Arathi Basin, saying "U noobs can only win in twink brackets. The Horde will march on a road of your bones -- gg, u nubz."

Alliance analysts who reviewed the hologram said that Bloodhoof appeared older and more frail than he had in previous messages and was possibly using shoe polish on his hooves and wearing prosthetic horns.

"We have long known that Cairne has been disabled by the poison from that elite scorpion near the river in Durotar, and it seems that his much-vaunted 'healers' have been unable to cure him," said Glibly Stoutbelly, a Horde analyst with the League of Explorers in Ironforge.

"Far from being a propaganda coup for the Horde, this just shows how frail Cairne really is. Also, from the amount of snot coming out of his snout, I'd suggest that he has bovine influenza."

Meanwhile, Stormwind tried to play down the long-awaited report on the Arathi Basin troop surge by Elven general Greyhair Petraeus.

"OMFG! Like, the worst group ever! Tehse guys totally suckzorz," Petraeus said in his official battleground leader's report. "I'm like, '1 or 2 of u fagz go on d at the mine' but tehy're all, like, totally zerging the farm and telling me to fuck off and do some dps. I'm, like, 'U all suck balls. l8r nubz'."

"I mean, fuck that. Asshloes."

In a further setback for the Alliance, in 51-60 Alterac Valley yesterday, more than 100,000 ally troops were totally pwnt, while Orcish shaman Drek'thar, who didn't suffer a scratch in the engagement, entertained his fighters with a selection of show tunes and a "tight five" minutes of stand-up comedy about how Night Elves look kind of ghey.