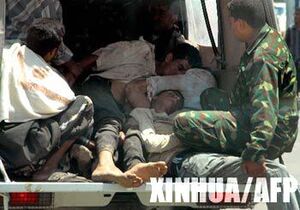 YEMEN - A football game, or soccer for stupid Americans, broke out in a stadium in Yemen, where President Ali Abdullah Saleh was holding a pre-election rally. Irish hooligans killed at least 51 people and more than 230 beers were spilled.

But conflicting reports also say that Irish hooligans may have killed at least 230 beers and at least 51 people spilled onto the main stage. CNN is still having troubles verifying which story is true.

Irregardless, Islam extremists are saying most of the dead are children. The Israelis are saying that's not true and that most of the dead were Muslim Fundamentalist footballers that were merely caught off guard as some 150,000 people had gathered and rushed the goals. The stampede occurred when people where trying to score points while everyone was ignoring the Presidents speech.

The incident happened at Ibb, about 180 kilometers south of Yemen’s capital, Sanaa. The infuriated President outlawed football saying it was an abomination to Allah, and it could only be played if it was called soccer. The CIA denied any involvement with the President's statements.

Saleh who reversed his earlier decision not to re-run for elections has been in power since 1978 as President of North Yemen and then head of the unified Yemen after North and South merged in 1990. The first independent elections were held in 1999 in Yemen after a stampede of people nearly wiped out half the population.