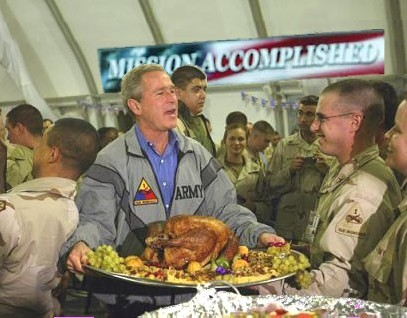 WASHINGTON D.C. — US President George W. Bush declared an end to major combat operations against E. coli in America today to an ecstatic crowd of 1,500 sailors and a plethora of reporters aboard the U.S.S. Nixon. "We have successfully flushed-out the E. coli menace," said Bush, "E. coli, as we all know, has posed a threat against America for some time, and was directly responsible for the attacks of September 11th. This is a great accomplishment for Americans everywhere, especially in America."

Despite Bush's claim that the mission has been accomplished, infiltration by E. coli into the American grocery stores has been continuous and recent. In late September, the Topps Meat Co. recalled 21.7 million pounds of frozen hamburger patties after 40 people in eight states got sick from contaminated beef believed to have been imported from Canada. In light of this most recent attack, Secretary of State Condoleezza Rice has hinted that the United States military may begin combat operations against Canadian cows. UnNews was able to get a brief word with a Quebec-native vache, who when asked about her opinion on the matter, stated, "Moo, eh?"