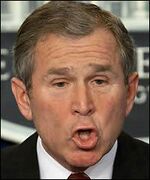 President Bush admitted in a speech today that his IQ is "a mere 68."

WASHINGTON DC -- In a candid speech to the nation on Wednesday, President Bush acknowledged various facts which until now his administration had been vehemently denying. The revelations come as the White House is slowly coming to terms with the failing war in Iraq and other problems.

The speech's first bombshell was Bush's admission that secret CIA prisons exist in various parts of the world. In those facilities, not only do the Geneva Conventions not apply, but the torturing is so severe that, "even medieval dungeon keepers would be jealous," according to the President. At a follow-up press conference, reporters confirmed that these prisons are present in Saudi Arabia, Romania, and Pakistan. "Don't forget about Poland!" added Bush.

But the CIA prison revelation was quickly overshadowed by an even more striking admission from the Commander in Chief. The President boldly declared what many have suspected for years, if not decades, "My IQ, or "intelligence quotient" as those fancy scienticians like to call it, is a mere 68. In other words, it's well below normal." Despite this news, Bush was quick to clarify that the overall policies of his administration would remain unchanged: "We will pursue the same strategery in Iraq and ensure that terrorists don't get their hands on any nucular weapons."

White House press secretary Tony Blair Snow did his best to spin Bush's announcement as positive. "The President's candid confession about his mental capacity can serve as a beacon of hope for all American children - they'll know that even a retard can become the leader of our great nation." Mr. Snow went on to explain that many "mentally challenged" people went on to achieve greatness in life. After citing Forrest Gump as an example, which reporters pointed out was a fictional character, the press secretary offered Paris Hilton as a "real-life case of an utter idiot becoming rich and famous. And let me assure you that the President's IQ is higher than Miss Hilton's."

Democrats are hopeful that Bush's latest admissions will help their party in the upcoming mid-term Congressional elections, but Republican pundits predict just the opposite. "Studies show that red staters are far less intelligent than the average person," explained campaign mastermind Karl Rove, "so in a way, Bush is now even more appealing to his target demographic."

In an exclusive interview with new CBS evening news host Katie Couric, the President attempted to explain his reasons for authorizing the secret CIA prisons in the first place, "You see, Katie, 9/11. The lessons of 9/11. We got fooled once, but, as they say: fool me once, shame on you... fool me twice... shame on, shame on... well, fool me once you can't get shamed again." Asked why he felt it was safe from a national security standpoint to reveal the existence of the facilities, Mr. Bush said that they were no longer used because "all the former inmates have been executed by now."