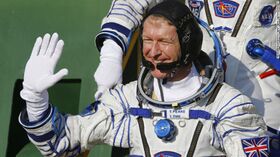 Tim says it's okay in space, but the ISS could really do with a grandfather clock, wood burning stove, doilies on the table and perhaps carpeting.

LOWER EARTH ORBIT -- Astronaut Tim Peake has accidently called UnNews from the ISS while trying to get connected to his parents. However, the tea-drinking high-flyer was happy to be interviewed about his experiences with the mission so far:

ISS: Er, hello, mummy, is that you? It’s me, Timmy and before you ask I did pack my athlete’s foot powder, but no one has complained about my trainers anyway. Did you send my DVD to Baikonur?

UN: Hi Timmy, I think you have dialled the wrong number. Are you calling from boarding school?

ISS: Oh, dreadfully sorry. No, I am an astronaut on the International Space Station.

UN: A Brit called Timmy on the ISS? How did you manage that, I mean that Soyuz looks cramped at the best of times, did you hide in the orbital module?

ISS: No no, I was meant to go, honest. I did training and everything. Don’t you ever read the news?

UN: Never, news is boring, I prefer sit-coms. Is there a TV room on the ISS?

ISS: No, which is pretty lame considering the expense of everything. Mummy is supposed to send a DVD of Eastender’s Christmas Special on the next Progress rendezvous though, that is why I was calling her.

UN: Cool, well I won’t give the game away too much, but Bobby Beale has killed again.

ISS: Wha... you asshole. That was the only thing I had to look forward to. It’s not easy being the only Brit up here you know, I can’t even get The Archers on radio 4. They won’t let me play outdoors either, something to do with my accent. I'm told that mission control is in hysterics every time I ask them to send some Digestive biscuits. Apparently I sound like Basil Fawlty or something.

UN: Makes sense to me. So what’s the weather like?

ISS: Very good so far, it certainly hasn’t rained or even become overcast. What about you?

UN: Terrible rain, Yorkshire and Lancashire are flooded. The picture improves over the next two days then it kicks off again. Carol is looking nice though, for her age. I guess rain and wind just float up there?

ISS: Ah, that would be it. Not that I’ll get to find out at this rate, I even brought spare brollies and woollen mitts for the EVA crews but they were adamant they did not need them. Trying to be “tough” I imagine, but as mummy always says: you’ll catch your death out there if you get wet and cold. The queue is nice and short for meals though, not that I mind waiting my turn of course. I get to choose what I eat too, so it’s beef with boiled potatoes, peas and carrots with scrummy gravy every day. They even have sorted me out spotted space-dick with zero G custard. Only thing is there is no beer.

UN: No beer? Not even Greene King IPA?

ISS: Not even a stout... or a pickled egg in sight. No footie night either. It reminds me of our package holiday to the posh area of Gran Canaria last year. No Rooney's Bar, no chippy and no Sky Sports. I mean who has ever heard of paella anyway? Still I got a good tan, so it wasn’t a wasted journey.

UN: Sounds awful. But floating must be nice, you know, fun.

ISS: Well, it’s less painful when they hang me up by my pants in the cloakroom...sorry...EVA module. In fact I can sleep hung up, so that’s okay. I brought some floral chandeliers for the lights and curtains for the windows to make it more homely too. I have also been putting up shelves, but can’t find a way to stop the blue porcelain cats and photo frames of the Royal family floating away.

UN: What do mission control suggest?

ISS: Well, they said as it wasn’t in the timeline they will need a few meetings, but did recommend I bring my fridge magnet collection next time. Anyway, got to go, the Commander Mr. Kelly is calling me from the Lymph Node or whatever its called. It looks as if Cosmonaut Yuri Malenchenko has blocked the bog again. Goodbye nice to chat, hope the ring-road traffic isn’t too bad today.