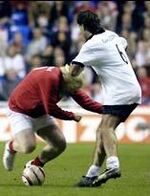 England football (soccer) coach Sven-Göran Eriksson has shocked the nation by announcing that MP Boris Johnson is to be included in the squad for the forthcoming World Cup in Germany as cover for the doubtful Madchester Oasis striker Layne Wooney.

The announcement comes just days after Johnson's mammoth performance against the host nation in a recent warm up match, in which he executed an inch-perfect 'tackle' on an opposition player. According to sources, Johnson's inclusion has been put down to a mass media campaign propogated by tabloid newspapers and Internet websites, which categorically state that with him, England's squad would be much sronger chance of winning the competition.

Boss Eriksson said of the inclusion:

"Anybody who has the guts to nut a German player in the balls like that wins him a place in the England squad alone."
"I know it's a gamble but he is a big talent. Although his fitness is questionable, I can't wait to start working with him. It is certainly an exciting prospect."

However Eriksson came in for some criticism by reporters at the press conference at FA headquarters, facing tough questioning over the omission of such rising stars as Teddy Sheringham and Prince Charles. He repiled:

"The squad of players I have selected represents the very elite of English football. Anyone who dares question the Great Svengali will certainly perish in hell."

At which point the conference was called to a halt as Eriksson retreated for his two-week, all expenses paid trip to Barbados.

The squad in full