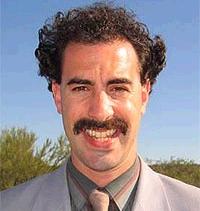 LONDON - Sacha Baron Cohen, who is really Jewish, not Arabian, created the character Borat, which, in Kazakhstan, means “penis”; now, he has created a list of the “most powerful Americans.”

This list was preceded by his roster of the “most powerful men in England, Great Britain, and the United Kingdom,” which no one, outside England, cared enough to consult, although Her Majesty, Queen Elizabeth, was reportedly “less than pleased” to find that she was not listed. “Someone please tell Her Majesty that she’s a woman,” Cohen said. “If she gets a sex-change operation, maybe I will list her on my next list.”

The list of Brits appeared in CQ magazine, sales of which were disappointing. His list of the most powerful Americans, although completed, won’t be published for three months, because of the lead-time required by editors, when it is expected to appear in Playgirl, because, Cohen says, “it is read by both men and women,” in Time “because my liberal friends say they like Time,” and in Mad Magazine and Playboy, “for the kids.”

Cohen says his list of criteria for determining who made his list of the most powerful Americans was “quite extensive,” and included such characteristics as “his or her hang time, or the amount of time a person was able to milk the media, remaining a topic of gossip for television shows or celebrity gossip magazines; his or her average popularity in the polls; the number of celebrities he or she knew who would actually return the individual’s telephone calls; how often he or she appeared on the cover of The National Enquirer, The Weekly World News, or People magazine; and whether or not he or she had been involved in a scandal related to sex, drugs, and/or rock and roll. For women, breast size was also an important consideration.”

Although Cohen would not identify all of the persons on his list, he said that Rosie O’Donnell, Donald Trump, Saddam Hussein, Barak Obama, Nancy Pelosi, and Pamela Anderson all made is list, for various reasons. President Bush, he said, is an example, of a well-known American who did not make the list. “The polls hate him,” Cohen said, “although he has a lovely wife and cute daughters with ample breasts.”

For the full list and all the juicy gossip that accompanies it, Cohen declared, Americans will have to wait until March. “Check it out,” he advised. “Maybe your next-door neighbor--or, even better, your boss--is on the list, as a sex pervert or a drug addict.”