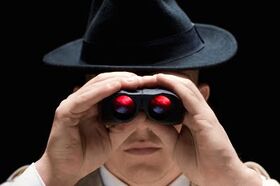 I know you had a wasp in your jogging bottoms yesterday.

WASHINGTON, D.C. -- Google and Apple have released an open letter warning President Obama that private digital information they have misappropriated should not be re-misappropriated.

The Obama Administration has proposed to reduce the encryption level on phones and websites so that the government can read it, which incidentally would be a level at which everyone else can read it too. Google and Apple protested that such a change would let private interests, such as Microsoft, Super-Viagra.com, or ISIS Ltd., use the data for personal gain, when the data was explicitly gathered for the authors' own personal gain. The change might level the playing field, not to mention level the local café and a decent swath of the suburbs.

“Strong encryption is the cornerstone of the modern information shop window,” states the letter, signed by 140 members of a review group appointed by Mr. Obama himself to assess policies after the leaks by former NSA contractor Edward Snowden, doing-business-as Wikileaks. The letter — written as irony strain gauges were throwing springs and hypocrisy-filled balloons were close to bursting — asserts that their customer "harvests" are their cow and they alone should get to milk it. 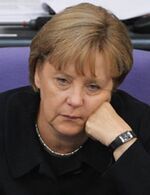 The hot German chancellor was outraged that the U.S. government found out she likes two from Column A and only one from Column B.

The NSA, having already been caught with its pants down listening to Angela Merkel order her Chinese take-out last year, has pursued a plan of "accustomization." Similar in principle to Apple’s "customerization," accustomization means violating privacy so prolifically and blatantly that no one views it as spying at all. Google has no such program — only a slogan saying, "Do the Right Thing."

FBI Director James B. Comey said it is a natural consequence of the "expectation of privacy" jurisprudence at the U.S. Supreme Court. In this legal theory, if you can't amend the Constitution to remove people's rights, just violate them so regularly that no one thinks he had any rights in the first place. After mandating a laughably poor level of encryption for digital data, a follow-on project will compel suitcase manufacturers to limit customers' color choice to transparent.

At a recent roundtable, Mr. Comey said: “You might not like us listening to you shouting at your neighbor over their dog barking, or talking dirty to your girlfriend, but it is surely better than your entire family being murdered in their beds by swarthy foreigners.” At that point, reporters merely looked at one another sheepishly.

Mr. Comey said that transparent suitcases would achieve the same public benefit as being pawed over by tenured hacks in the airport jetway, but much less obtrusively. “After everyone gets used to the idea, things would feel the same as before,” Mr. Comey continued, “Think of it this way; instead of me sitting on the train in sunglasses, pretending not to be reading your newspaper, I read it blatantly, as though I am just rude. There's no difference. Except, of course, if you complain, you will probably disappear one night.”