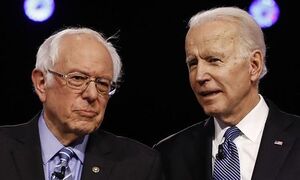 WASHINGTON, D.C. -- Joe Biden told Sen. Bernie Sanders that, even though their competition for the Democratic nomination for President continues, Biden is well along in picking a Vice President.

As Biden previously pledged to select a woman as a running mate, he said he is conducting his search mostly where women congregate: in the pages of gentlemen's magazines. Playboy has gone out of business as a print publication, but Biden said Hustler fills the bill. "They tend to be sluttier, but I think that will make us a compatible campaign team. What was the other part of your question, again? I remember there were three parts."

The bigger problem with using Hustler is that most of its "candidates" are well below the age of 35 that is a Constitutional prerequisite to being President. Fortunately, Biden is in peak condition and would be able to serve out two 4-year-terms with no health concerns, especially if the terms ran concurrently rather than consecutively.

Sanders insisted last week that he sees a "path to the Presidency," but Biden told him he is also picking out new upholstery and drapes for the Oval Office.

The Democratic campaign, now down to two candidates, is hampered by the ongoing Coronavirus panic, which has brought the United States to a virtual standstill and prevented face-to-face meetings. In fact, the only way the two men could meet was for Sanders to attend Biden's $2,800-per-person "virtual fireside chat," an Internet version of the time Biden says FDR got on national television after the stock-market crash in 1929. Sanders said the cost of "attending" the event, by "going to Joe30330" and typing out a question for Biden to answer, is deductible as a campaign expense.