UnNews:Being "blonde" may be catching 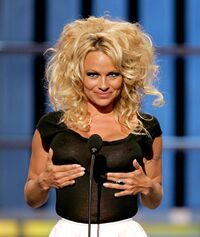 New study shows being “blonde“ may be catching.

GAY PARIS, France - According to a recent scientific study, being “blonde” may be catching. The dumb blonde stereotype, it turns out, may be true, not only of blondes themselves, but also of others who come within 500 feet of them. To paraphrase Shakespeare, blondes are not only dumb in themselves, but the cause of dumbness in others as well!

Researchers at Paris’ University of X-Nanterre showed men pictures of blondes, brunettes, and redheads. Then, the men took general knowledge tests. Men who ogled the blondes performed “significantly lower” on the tests than counterparts who’d studied photographs of brunettes and redheads. The conclusion? The men did worse because they were unconsciously copying the dumb-blonde stereotype.

The experiment was repeated, but with hooded assistants wearing sandwich board signs bearing enlarged photographs of women with blonde, dark, and red hair. The men were not allowed within 500 feet of the assistants. Nevertheless, once again, the men who saw the blondes’ pictures scored much lower on the general knowledge tests than their counterparts in the control groups. Researchers concluded that the dumb blonde effect is effective to a distance of 500 feet, or approximately one-tenth of a mile. “The dumbing down effect of blondes on men is impressive,” Dr. Pierre Minke told Unnews’ reporter Lotta Lies, “and the effect increases exponentially if the blondes are big busted.”

When brunettes’ and redheads’ breast sizes were larger than normal, men also experienced a decrease in test scores. “It seems that breast size may be a factor that contributes, along with blonde hair, to men’s decreased intelligence levels--or, at least, to their descreased ability to apply their intelligence.”

“Further research is needed,” Minke agrees, “especially since a couple of the women in our study turned out to be intact transsexuals.”