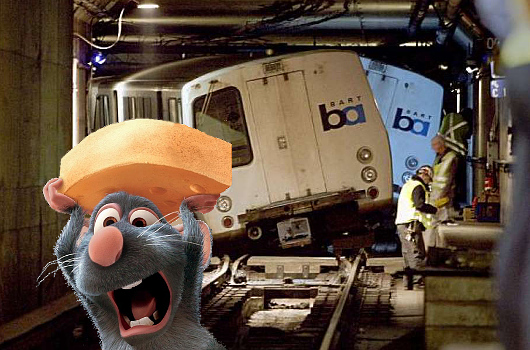 Holders of BART free tickets are also allowed to operate equipment. The minor incident here was not caused by 3-year-old Timmy at the controls. Officials blamed a jammed switch due to a piece of pepperoni dropped by a rat carrying a slice of pizza. (TASS News Agency)

LO MISMO, California -- At a time when BART (Bay Area Reprehensible Transit) is floating bond issues and trying to operate an aging system that never gets standard maintenance, a report has revealed that the transit agency gives away free rides amounting to $3.5 million a year. BART desperately needs funding to extend service to places where nobody is familiar with their reputation and to build stations in the middle of nowhere. They also need to pay themselves the big bucks because spinning your wheels in one place without going anywhere is tiring.

The free tickets have been available since BART's opening in 1972. They are given to current employees, BART retirees, board members and their families, about 17,000 people in all. In typical BART fashion, the perk will soon be extended to BART employee's and board members' peons household help, extended family members with airfare included if needed, plus anyone named Bart. "It’s only fair," said BART director Caspar Milquetoaste, adding that fares would only need to rise by an estimated 120-130% to cover half the shortfall. BART will also spend $15.5 million to study the free ticket situation and $8.2 million to study how leeches work.

BART also notes its free ride project is already extended to select members of the public. This includes homeless people, the insane who don’t take their meds, tough-looking thugs, yuppie-scum fare scofflaws and others that station agents warmly wave through the fare gates.

Yet advocates for those groups have filed suit, citing BART's poor on-time service, broken escalators and the lack of little bells to summon servants with little hot towels for refreshment. BART is now spending $50 million to build high-speed turnstiles just for them. Director Milquetoaste noted that federally compliant signage is a problem for these special gates, as there is no CHUD symbol.

BART also proudly points to its free Uber/Lyft parking zones, otherwise known to most of the public as no stopping/parking red zones.

"Of course, we have not ignored the daily commuter who pays for our outrageous salaries," noted Milquetoaste. "We will be replacing the aging, often malfunctioning fare gates, too.". $26.5 million will be spent on a study to determine the feasibility of having commuters crawl through artisanal hand-dug tunnels to enter and exit the stations, "just like Cu Chi in Vietnam". That is highly appropriate, as BART will be extending service to Vietnam, planned for 2025, with a station on the former site of My Lai 4. All Vietnamese Communist Party members will be given free passes.

Accounting Department head and Superintendent of Birthday Parties Regina Speinless said, "You should thank God it's only $3.5 million. It could be much worse. BART people aren’t stupid. They know enough to not to ride." In a recent survey of BART employees, 99.6% of all respondents never used BART in their lives. 98.9% said they would never want to anyway, citing crowding, filth, crime, poorly maintained equipment and the lack of little bells to bring servants with little hot towels for refreshment.

BART station agent Fred Awol stated, "It’s not really a free ride. My wife and I make our kids take BART to private academy rather than have any of our four chauffeurs drive them directly. However our personal Blackwater security team has to force them at gunpoint to the station and ride along with them, so we have to pay those guys overtime for that."

BART retiree I. M. Indoulent noted, "I let my dogs use the ticket. I put hats on them and nobody knows the difference. That way, when they need to take a dump, they can do it on a BART platform, stairwell or train like everyone else."

Noted Bay Area resident Joshua A. Norton, Emperor of the United States and Protector of Mexico, was unavailable for comment as he has been dead for 137 years.